The Bruising of Qilwa by Naseem Jamnia

Firuz-e Jafari is fortunate enough to have immigrated to the Free Democratic City-State of Qilwa, fleeing the slaughter of other traditional Sassanian blood magic practitioners in their homeland. Despite the status of refugees in their new home, Firuz has a good job at a free healing clinic in Qilwa, working with Kofi, a kindly new employer, and mentoring Afsoneh, a troubled orphan refugee with powerful magic.

But Firuz and Kofi have discovered a terrible new disease which leaves mysterious bruises on its victims. The illness is spreading quickly through Qilwa, and there are dangerous accusations of ineptly performed blood magic. In order to survive, Firuz must break a deadly cycle of prejudice, untangle sociopolitical constraints, and find a fresh start for their both their blood and found family.

It feels like it’s taking forever to get anywhere. It’s so short that I made it over halfway through but I’m not enjoying it and I keep reading other things instead of making any progress.

I was excited by the idea of a queernormative fantasy world but ultimately distressed by a queernormative fantasy space having dysphoria and medical gatekeeping for trans/nonbinary characters. The only thing I know about a particular trans character is their dysphoria and desperation, with not much shown of their personality beyond that. They’re not the only trans/nonbinary character, which helps a little, but is still frustrating. 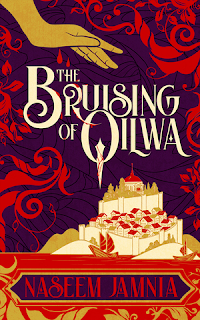