Pull three people out of prison--a disgraced paladin, a convicted forger, and a heartless assassin. Give them weapons, carnivorous tattoos, and each other. Point them at the enemy. What could possibly go wrong?

In the sequel to CLOCKWORK BOYS, Slate, Brenner, Caliban and Learned Edmund have arrived in Anuket City, the source of the mysterious Clockwork Boys. But the secrets they're keeping could well destroy them, before the city even gets the chance...

THE WONDER ENGINE is a perfect sequel to THE CLOCKWORK BOYS, full of wit and care between a small group of people expecting to spend the rest of their extremely brief lives in one another's company against long odds and in great danger.

Grimehug plays more more central role here, but specifically not as one of the heroes. He's accompanying the humans so that some gnole is keeping track of them, much as other gnoles accompany the clocktaurs. Learned Edmund's change of character is gradual enough to feel reasonable, but is a complete transformation from his first appearance in THE CLOCKWORK BOYS. I love Slate and Caliban, and I like finding out a bit more of Slate's former life in Anuket City. Brenner continues to be a lurky assassin and an excellent character.

This does a tremendous amount of worldbuilding related to gnoles as their society intersects with humans in Anuket City. It also shows much of Anuket City's underworld, which is highly involved in most other parts of the city's functioning.

As the second book in a duology, this shows the crew’s whole stay in Anuket City and briefly addresses the aftermath. It addresses Slate and Caliban’s feelings for each other, the mystery of the Clocktaurs, Gnole society, and Learned Edmund’s personal growth. It doesn’t leave anything for later, while other books are set in this same world, these particular characters’ story seems wrapped up for now. Slate and Caliban are the main point-of-view characters, just like in the first book, with a brief section or two from other characters. I don’t think anything is both introduced and resolved here, but this is literally part two of two books and it has its own storyline by being specific to a place while the first book was the journey there.

If someone read just this book without the first one it might make enough sense to be interesting, but several parts of the finale and a lot of the character growth depends on seeing how they started out, which is contained in CLOCKWORK BOYS. While it might still be enjoyable on its own, I definitely recommend reading both books as they are much better together.

If you enjoyed THE CLOCKWORK BOYS then don't skip THE WONDER ENGINE! 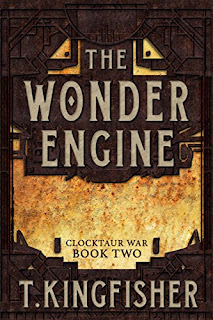