The details of the 2023 reading challenge are now available! You can find the details on the Carrd for the challenge, or join in on TheStoryGraph.

Unless for some reason it's resolved by the time this newsletter releases (which would be good news), the HarperCollins workers union is on strike and has been since November 10th, 2022. Here's the union's LinkTree, which will have the most up-to-date information on the situation.

Reviewers have been asked to hold reviews of all HarperCollins books (but not to boycott the company). This means that there's a small pile of reviews that will be released whenever the strike concludes, some for books I read before the strike, and a few read during.

Reviews forthcoming for SWORDHEART by T. Kingfisher, LUCK IN THE SHADOWS by Lynn Flewelling, and STEEL'S EDGE by Ilona Andrews.

CLOCKWORK BOYS by T. Kingfisher, book 1 of Clocktaur War is Fantasy/Sci-Fi, with queer character(s), marketed as Adult. Slate and two other condemned criminals, plus a scholar, are sent on a suicide mission to an enemy city to find out what the Clockwork Boys actually are (besides highly effective killers). Told in Third Person with Dual POVs.

SONS OF DESTINY by Darren Shan, book 12 of Cirque Du Freak is Fantasy/Horror marketed as Middle Grade. Darren faces Steve Leopard one more time, their battle will determine who is dead, and who is the Lord of the Shadows, destroyer of the world. Told in First Person with Single POV.

BAYOU MOON by Ilona Andrews, book 2 of The Edge is Fantasy marketed as Adult. William travels to the Mire to stop Spider and The Hand from completing their plans. Cerise and her family's feud with the Sheriles is tangled up in it, forcing Cerise and William to work together. Told in Third Person with Ensemble POVs.

THE WONDER ENGINE by T. Kingfisher, book 2 of Clocktaur War is Fantasy/Romance, with queer character(s), marketed as Adult. Slate and her companions have reached their destination, now they must survive it. Told in Third Person with Ensemble POVs.

BE THE SERPENT by Seanan McGuire, book 16 of October Daye is Fantasy, with queer character(s), marketed as Adult. Toby appears for the sentencing of Rayseline Torquill. Barely is that event over when tragedy strikes and she finds out that one of her oldest friends has been an enemy in disguise. Told in First Person with Single POV.

FATE'S EDGE by Ilona Andrews, book 3 of The Edge is Fantasy/Romance marketed as Adult. Kalder teams up with Audrey, a thief who did one last job in exchange for her father leaving her alone. Unfortunately that job was for the Hand, and Kalder has been sent by the Mirror to get the item back. Told in Third Person with Ensemble POVs.

UNTETHERED SKY by Fonda Lee is Fantasy marketed as Adult. Ester is a ruhker, training her roc to hunt manticores after one killed her mother and destroyed her family. Told in First Person with Single POV.

For 2022 I'm hosting a reading challenge that lasts the whole year. December's prompt is to read something by a Black author. Our patrons voted for QUEEN OF THE CONQUERED by Kacen Callender.

I drafted this early so I didn't have to worry about podcasting and reviewing during Yule and my birthday week, so I don't know yet what I'll be reading right now, but it's probably at least some of my presents.

This time last year I read RADIANCE by Catherynne M. Valente, which we later ended up covering on the podcast.

I made a roundup of duologies, trilogies, and series by authors of color where I've read and reviewed every book in the series. You can find that list here.

The 2023 prompts are now available from the annual reading challenge! It runs from January 1st to December 31st this year. Find info and links here.

As for the podcast, hopefully you're enjoying our most recent episode, THE STORYTELLER'S DAUGHTER by Cameron Dokey, as well as the first half of our interview with author Seanan McGuire (AKA Mira Grant, A. Deborah Baker), released in January. If you'd like to receive the second (spoiler-filled) half of the interview, please consider supporting us on Patreon. Patrons receive this newsletter one week early, as well as a list of upcoming podcast episodes. 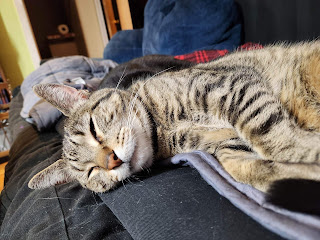