Wounded heroes of a cataclysmic battle, Seregil and Alec have spent the past two years in self-imposed exile, far from their adopted homeland, Skala, and the bitter memories there. But as the war rages on, their time of peace is shattered by a desperate summons from Queen Idrilain, asking them to aid her daughter on a mission to Aurenen, the very land from which Seregil was exiled in his youth. Here, in this fabled realm of magic and honor, he must at last confront the demons of his dark past, even as Alec discovers an unimagined heritage. And caught between Skala's desperate need and the ancient intrigues of the Aurenfaie, they soon find themselves snared in a growing web of treachery and betrayal.

As the third book in a long series, this picks up the thread of Seregil's backstory and exile from Aurënen. His exile status is important to current events, as the hostility surrounding his past affects the current diplomatic mission. The mission itself is introduced and resolved within the book. It opens up new possibilities for later, related to Seregil's status and some actions he and Alec take at the end of the story. Seregil and Alec are consistent with their earlier appearances. This is a long and mostly self-contained story which could stand on its own. The important prior events are summarized when necessary in a manner that would let new readers catch up easily.

The main reason I would not advise this book as an introduction to the series is that it's incredibly boring for a long while at the start. The story begins very slowly, taking the first half to outline the complicated factions and political tensions of the Aurënfaie before turning into an investigation of violence done against the visiting Skalans. I almost considered quitting, but kept going because I do want to know what happens next for these characters. If you're happy with how the second book ended and don't need to watch Alec and Seregil actually living out their relationship, then feel free to treat it as a duology rather than a series and don't read this one. If you're hoping to read the full seven-book series, then the second half of this is much more exciting and I ended up enjoying it by the end. There's a lot to love in it, but I feel like the first half follows the glacial pace of the Aurënfaie while the second half is more Skalan. 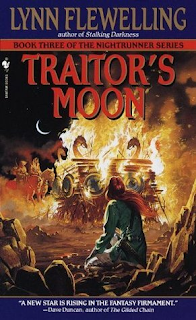