Reviews forthcoming for SERVANT MAGE by Kate Elliott, TRAITOR'S MOON by Lynn Flewelling, and IN THE HAND OF THE GODDESS by Tamora Pierce.

SWORDHEART by T. Kingfisher is Fantasy/Romance, with queer character(s), marketed as Adult. Halla is a housekeeper whose relatives try to hold her hostage. Sarkis is an immortal swordsman who is sworn to defend her after she draws his sword. Told in Third Person with Dual POVs.

LUCK IN THE SHADOWS by Lynn Flewelling, book 1 of Nightrunner is Fantasy, with queer character(s), marketed as Adult. Alec and Seregil break out of prison and begin trying to unravel a complicated political conspiracy. Told in Third Person with Ensemble POVs.

STEEL'S EDGE by Ilona Andrews, book 4 of The Edge is Fantasy/Romance marketed as Adult. Richard is on a mission to wipe out slave trafficking in the Weird, and teams up with blueblood Charlotte de Ney when she begins using her healing magic to kill. Told in Third Person with Ensemble POVs.

A CLASH OF STEEL by C.B. Lee, book 1 of Remixed Classics is Historical/Retelling, with queer character(s), marketed as Young Adult. Xiang has been shut away in a remote village for her whole life when she finally gets a chance for adventure after meeting a sailor who unlocks the secret in her father's pendant. Told in Third Person with Single POV.

ALANNA: THE FIRST ADVENTURE by Tamora Pierce, book 1 of Song of the Lioness is Fantasy marketed as Young Adult. Alanna trades places with her twin and disguises herself as a boy in order to become a knight. Told in Third Person with Ensemble POVs.

STALKING DARKNESS by Lynn Flewelling, book 2 of Nightrunner is Fantasy, with queer character(s), marketed as Adult. Alec and Seregil are called upon to help Nysander with a secret centuries in the making as their adopted country prepares for war. Told in Third Person with Ensemble POVs.

I didn't finish my ARC of SPICE ROAD by Maiya Ibrahim because I don’t like the pacing, nor the main characters. There’s a dizzying amount of detail about objects and surroundings but almost nothing about the magic that’s supposed to be of such importance to the story. I struggled to get through the first 18% and then stopped.

I also stopped reading THE SLEEPLESS by Victor Manibo almost immediately because I disliked the style and main character.

I wrote a formal DNF review for VOLARIA by M.D. Neu.

I just re-read THE GRACE OF KINGS by Ken Liu and MEXICAN GOTHIC by Silvia Moreno-Garcia, both as audiobooks. I also re-read THE RAVEN BOYS by Maggie Stiefvater.

For 2023 I'm hosting a reading challenge that lasts the whole year. January's prompt is New Beginnings, to read a book where the main characters have never met before (or with a multicolor cover).. Our patrons voted for The Atlas Six by Olivie Blake.

I'm still working on BREAKABLE THINGS by Cassandra Khaw. It's a short story collection so I'm reading one story at a time in order to take them in.

My re-read of HARROW THE NINTH by Tamsyn Muir is going well. When I finish I can move on to a first-time read of NONA THE NINTH, so I'm looking forward to that. I'm also re-reading THE DREAM THIEVES by Maggie Stiefvater and THE WALL OF STORMS by Ken Liu.

FOUL LADY FORTUNE by Chloe Gong is witty, mysterious, and a joy to read. I keep reading her books at the turn of the year, and it's going well.

ROYAL ASSASSIN by Robin Hobb is a book I liked when I read it in high school, but I find myself not liking Fitz quite as much now. It's also the part of his story where he's having trouble navigating being in a more adult role while still a teenager, so it might just be that I'm far enough past that time in my life that I don't agree with his way of going about it.

A RESTLESS TRUTH by Freya Marske is fun and mysterious, not quite as grim as A MARVELLOUS LIGHT got at times. It's a murder mystery/romance on a cruise ship and I'm having a great time reading it.

This time last year I read THE WOLF AMONG THE WILD HUNT by Merc Fenn Wolfmoor, a fantasy novella involving the wild hunt.

The 2023 prompts are now available from the annual reading challenge! It runs from January 1st to December 31st this year. Find info and links here.

As for the podcast, hopefully you're enjoying our most recent episode discussing THE STORYTELLER'S DAUGHTER by Cameron Dokey. If you'd like to receive episodes early, as well as bonus content, please consider supporting us on Patreon. Patrons receive this newsletter one week early, as well as a list of upcoming podcast episodes. 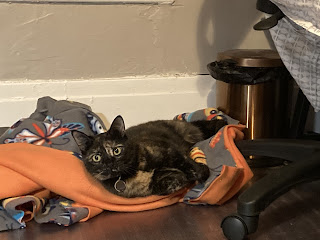