Newly knighted, Alanna of Trebond seeks adventure in the vast desert of Tortall. Captured by fierce desert dwellers, she is forced to prove herself in a duel to the death—either she will be killed or she will be inducted into the tribe. Although she triumphs, dire challenges lie ahead. As her mysterious fate would have it, Alanna soon becomes the tribe's first female shaman—despite the desert dwellers’ grave fear of the foreign woman warrior. Alanna must fight to change the ancient tribal customs of the desert tribes—for their sake and for the sake of all Tortall.

This book would be threadbare until almost the end if all the white savior stuff was removed, there isn't enough otherwise to carry it.

As a sequel, continues Alanna's journey by showing her first year after getting her shield, one which is spent primarily with a Bazhir tribe and eventually become their shaman. It wraps up Jon and Alanna's relationship, rather spectacularly though late in the book. It also continues Jon's meeting with the governor of Persepolis in the first book, leading into Jon becoming the new Voice of the Tribes. There's a new storyline related to this particular tribe's shaman and three teenagers with the Gift who have been cut off from most of their community, within this storyline several things are introduced and resolved. It specifically leaves some things for the final book in the quartet, including but not limited to whatever magic Thom is working on, and someone working to destabilize George's position as King of the Rogue.

Alanna is the main character, and I think the sections following her are narrated similarly to the previous two books. It's hard to tell, because this has so many colonialist and racist asides where she makes bad guesses about what's going on with the Bazhir, particularly with the women of the tribe. She repeatedly brings up her frustration about the women wearing face veils, but doesn't express any curiosity into why they're wearing them, or their cultural significance as anything other than signaling someone has begun menstruating.

By way of telling Kara and Kourrem her backstory, Alanna briefly summarizes the events of the first two books in a pretty complete manner, supplemented by a few additional explanations as fit the plot. A lot of the story could make sense to someone who hadn't read the first two books, but the final third or so is focused on storylines begun earlier. Overall, this would be a frustrating and probably confusing read for someone who used this as their entry point into the series.

The main storyline is a composite of white savior tropes, formed from several different variations on the Bazhir needing or wanting someone from Tortall to help them change. The Bazhir are a people organized into many tribes, unified by the Voice of the Tribes. Alanna becomes a warrior adopted into one of the tribes via trial by combat, and her presence is the catalyst for this tribe in particular to become more willing for their women to participate in traditionally male parts of their society. The current Voice informs Alanna that Jon, the current Prince and future King of Tortall, must become the next Voice of the Tribes so that the tribes stop fighting against Tortall and become fully part of the kingdom. The part that makes both of these storylines troubling is that the Bazhir are clearly meant to be a fictional version of real-world desert dwelling peoples, and therefore major aspects of the plot are inextricable from white savior tropes and colonialist stereotypes. The ones related to Alanna’s defiance of separate standards for men and women are at least in keeping with the theme of Alanna bending gender norms (which is the backbone of the series). But it's definitely an issue for the current Voice to request one of the conquerors to become the new keeper of his people’s hearts and history.

Alanna as the tribe’s savior coming in from the outside perhaps reaches its height when she ends up becoming the new shaman and taking three youngsters as apprentices. They had been rejected by the tribe for having the Gift, though I don’t see any good explanation for why they would be rejected as supposedly demon-possessed when the mere existence of the tribe’s original shaman means that the Bazhir know of magic and how to recognize it. My most lenient interpretation is that the shaman was greedy and didn’t want to be replaced, and so refused to acknowledge the magic of anyone who could possibly succeed him, which is certainly in keeping with his characterization. But the tribe’s refusal to do anything to fix the situation, literally waiting for the Balance to shift, means that explicitly in the narrative it only got better because Alanna arrived, which comes right back to her as a white savior.

The storylines I appreciate begin when Miles and Jon visit the Bazhir tribe to see Alanna and have Jon train as the next Voice. Through this time spent together outside of the palace and with Alanna’s identity no longer a secret, Alanna and Jonathan’s romance comes to a head when he asks her to marry him and then assumes she’s already said yes. The other follows George for a while after Alanna leaves the Bazhir to resume traveling.

The Ishak storyline bothered me when I read this as a kid, and now most of the book is frustrating. It has some important moments, but not enough to make it worth recommending. 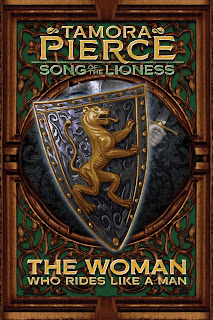