A master of subterfuge, a rogue thief with a noble air, Seregil of Rhiminee has taught his young protege, Alec of Kerry, his greatest secrets of the trade. Together they've made their way with thieving jobs large and small, winning friends and enemies, their lives in constant danger and yet charmed by an aura of magic, friendship, and trust. But now, as their adopted country prepares for war, Seregil is called away by the ancient wizard Nysander to face the ultimate challenge of loyalties and is entrusted with a deadly knowledge that, if breached, could cost both Seregil and the unwitting Alec their lives. As Alec learns the shocking truth of his own shadowed heritage, he, Seregil, and a handful of loyal companions are catapulted into a tumultuous conflict with the ultimate evil--a conflict in which magic alone may no longer shield them from harm.

STALKING DARKNESS finally answers the big mystery that has Nysander swearing people into secrecy if he tells them anything at all. Alec continues to be an excellent student of thievery and hidden things, and Seregil is maybe almost someday thinking about perhaps telling Alec he likes him... at a later date.

The plot follows Alec, Seregil, Nysander, and Micum as they are living life and doing sneaky (or magic) things. Seregil has a brief quest by himself at Nysander's direction, and a lot of the emotional tension in the first half related to Seregil trying to navigate the increasingly romantic direction of his already intense feelings for Alec. Mysterious antagonists have been tracking them since the first book, and their nefarious plan (centuries in the making) has finally come to fruition. Once they make their big move, the rest of the book is devoted to trying to stop them and save some of their victims. This connects with Beka's storyline in an unexpected but narratively neat way (though very bad for a bunch of her fellow soldiers).

Seregil's early mission features a far-away mountain-dwelling culture whose practices around visitors feel like a colonial fever dream. They're extremely welcoming, don't realize Seregil isn't the one actually doing magic (he's using prefabs from Nysndander), and won't take no for an answer on the subject of Seregil sleeping with their daughters. The reason for that last one is that they need new blood from visitors in order to not inbreed themselves too badly due to their isolation, but it comes off rather badly. If an individual character with a name seduced him during his visit that would be one thing, but what the text describes is a rotation between houses with sets of sisters wanting to sleep with him while he's in their dwelling. Thankfully this section avoids specific details of those encounters, but the whole thing felt very strange. A pair of later scenes where Seregil goes to brothels of his own accord felt more intimate than all the mountain encounters combined.

Noting here that when Alec has his first sexual experience (with a character we've been set up to dislike) it's unclear whether it's assault, but at the very least his will was magically impaired which makes true consent impossible. The story treats it as uncertain and the other characters follow Alec's lead on how to react to the event, but if I could change one thing I'd make it more obvious as to whether Alec was actually consenting.

This wraps up a bunch of things so completely that it feels like it could have been book two of a duology rather than what ended up as a seven book series. It finally answers and resolves the mystery of the scar on Seregil's chest and all the questions Nysander refuses to answer. It also (at long last) handles the extremely slow burn of Seregil and Alec's relationship as it changes from mentor and pupil to maybe something differently intimate. There's a new storyline related to Micum's daughter Beka joining the army. Most of what it resolves are things (and people) introduced in the first book, so much so that while there might be some small thing which appears and ends here I can't think of it.

I like the audiobook narrator and would happily listen to them narrate this series or another. The rotation of narrators sound consistent with their previous appearances, but I didn't strictly keep track of whether any were new this time around. This time we do get Beka's perspective on her first experience of war and command, I don't think she narrated at all in the first book. I like her sections, it's nice to see her living up to her warrior dreams from LUCK IN THE SHADOWS.

The ending gets much bleaker than anything in the series until that point, with some of the main characters in the hands of the villains and a long road to any potential rescue. The story handles it well, taking seriously the trauma inflicted, but it gets pretty stressful.

So much of this is built on LUCK IN THE SHADOWS that I don't think it would make sense or be satisfying without having read that first book. The highs wouldn't be as high and the depths wouldn't be so tragically, crushingly low otherwise. I started reading this series because I wanted very long books with magic, queerness, thieving, and general skullduggery. This hit everything on my list, with a slow burn romance and some war tossed in for good measure. 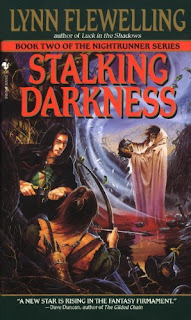