Severin Unck’s father is a famous director of Gothic romances in an alternate 1946 in which talking movies are still a daring innovation due to the patent-hoarding Edison family. Rebelling against her father’s films of passion, intrigue, and spirits from beyond, Severin starts making documentaries, traveling through space and investigating the levitator cults of Neptune and the lawless saloons of Mars. For this is not our solar system, but one drawn from classic science fiction in which all the planets are inhabited and we travel through space on beautiful rockets. Severin is a realist in a fantastic universe.

But her latest film, which investigates the disappearance of a diving colony on a watery Venus populated by island-sized alien creatures, will be her last. Though her crew limps home to earth and her story is preserved by the colony’s last survivor, Severin will never return.

RADIANCE is a feast of grief, a full spread of reactions, inactions, and mourning of a particular life and death, by those who knew Severin, loved her, or saw her movies and thought that was close enough to love and knowing. Told through various media such as scripts, interviews, journals, and editorials, RADIANCE is a lush portrait of an alternate early 1900’s cinematic solar system where the Edisons are a dynasty, supply chains stretch from Earth’s moon all the way to Pluto, with life sustained by the milk of callowhales on Venus, and imagination fed by silent films.

I love old sci-fi's imagination of the wonders of the solar system, before we knew that Mars wasn't brimming with water. RADIANCE embraces that imagination and makes it true. The rules are different here, where movie stars live on the moon, production teams travel to Venus for better lighting, and Pluto is a colony for those who want to be absolutely free to live under a pretty stringent set of customs. The worldbuilding is lovingly detailed, with reasons (implied or explicit) for each oddity until they blur together into a wonderfully strange whole.

My sense of what the story is wobbled and undulated as I was reading, as each new piece, every angle and new way of telling the story, they shifted my sense of the narrative. At the end I feel as though I understand Severin, at least a little, but also I have a deep sense of how foolish it is to think that I’d understand her through this biographical reimagining of her life and wishes, filtered through the gaze of someone who made her reenact important moments if the lighting was a bit off.

Some sections are breezy and delightful, oozing the upbeat patter of a newsreel or advertisement, scattered with references to contemporary figures and their planetary exploits, matter-of-factly describing life on various planets and moons. It’s excellent worldbuilding, as descriptions slowly drift between what genuinely seems like fun and more disturbing descriptions of what’s necessary for survival or expected as the rules of that particular location. I like this blend of narrative styles, creating the feeling of a great big book of everything one might want to say about Severin, pouring at first in a raw scream of grief at her absence, moving into a celebration of what she did with her presence, then contemplating a long future without her.

My favorite sections are the murder mystery theater portion and the last instance of The Ingenue's Handbook. The staged and surreal nature of the mystery theater felt like a perfect way to highlight the impossibility of reconciling Percival's need to know what happened to Severin, and his understanding of how impossible that would be. The Handbook, shortly thereafter, is by contrast acceptance and understanding of the writer's need to move on, but also great love for Severin that is undiminished even by her likely eternal absence.

The conclusion pulls everything together delicately and suddenly, like a magic trick, blink and you'll miss it. One instant I had a dozen questions and just a paragraphs or two later the whole story made sense in a way that I didn't expect but just feels wonderful. 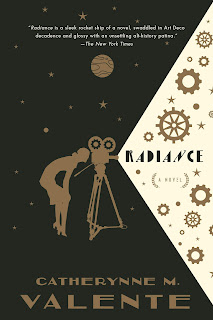