Fellian is a Lamplighter, able to provide illumination through magic. A group of rebel Monarchists free her from indentured servitude and take her on a journey to rescue trapped compatriots from an underground complex of mines.

Along the way they get caught up in a conspiracy to kill the latest royal child and wipe out the Monarchist movement for good.

But Fellian has more than just her Lamplighting skills up her sleeve...

SERVANT MAGE has the density of an epic fantasy in a novella-sized package, told from the perspective of a character who would usually be incidental to this kind of story.

Fellian is an interesting and well-defined character, I like her a lot, and she's what got me through this book. She's a commoner chosen for a specific but not unique skill, being used by people with a particular political angle and strategic goal that has very little to do with her everyday life. Where this fell apart for me is that it tries to fit a novel and a half of worldbuilding into a novella, gradually turning into a confusing blur of names and motivations that left me unsure of the point until the very end. In the final third of the book, Fellian is still asking questions about who people are and why things matter, and at one point is rebuked for doing so. It’s especially frustrating because this means the author knows it’s unclear, teases with the possibility of an answer and then declines to offer it when it would be most useful.

Even though there were a lot of details, most of them weren't useful in terms of understanding the secondary characters and their motivations. They seemed to fit character archetypes pretty generically and I kept mixing up who was who.

Minor spoilers to follow: I think it's supposed to be a slow burn reveal that actually both sides of this conflict suck and the Monarchists aren't as great as they seemed at first, but since the very first thing they do is kidnap Fellian and enlist her help under false pretenses which rob her of any meaningful agency for long stretches, I didn't spend any time thinking they were good. It ends up being a struggle between the group that will straight up murder a baby and the group that thinks it's fine to just cut one a little bit if it's for the greater good. By the end, it was impossible to think of either side as good, which is definitely the point of the book, but it felt like 20% kidnapping, 40% adventure, 35% confusing piles of unnecessary detail, with the final 5% as a manifesto about ordinary people making a difference for themselves while the bigger powers tear each other apart. 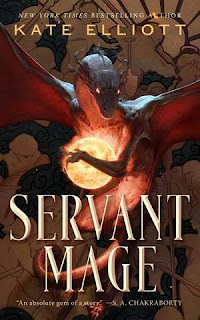