The Edge lies between worlds, on the border between the Broken, where people shop at Wal-Mart and magic is a fairy tale--and the Weird, where blueblood aristocrats rule, changelings roam, and the strength of your magic can change your destiny...

Charlotte de Ney is as noble as they come, a blueblood straight out of the Weird. But even though she possesses rare magical healing abilities, her life has brought her nothing but pain. After her marriage crumbles, she flees to the Edge to build a new home for herself. Until Richard Mar is brought to her for treatment, and Charlotte's life is turned upside down once again.

Richard is a swordsman without peer, future head of his large and rambunctious Edger clan--and he's on a clandestine quest to wipe out slavers trafficking humans in the Weird. So when his presence leads his very dangerous enemies to Charlotte, she vows to help Richard destroy them. The slavers' operation, however, goes deeper than Richard knows, and even working together, Charlotte and Richard may not survive...

STEEL'S EDGE is the conclusion of The Edge series, wrapping up the fates of heroes and villains alike. It answers things like what happened to Spider? will Élénore stay in the Edge? It also answers what happened to some minor characters from ON THE EDGE who either appeared briefly or were discussed but never seen. Technically most of what it resolves was introduced in earlier books, as it finally deals with the slavers who have been referenced throughout, specifically but not only as they relate to what happened to Lark/Sophie. The point-of-view characters are different yet again, this time George gets to narrate a little (last book was Jack's turn), and the main couple are new as narrators. Richard Mar has been around since BAYOU MOON, but Charlotte de Ney makes her debut here. It's nice to see Richard as more than just the repeatedly-referenced, serious older brother to Kaldar and cousin to Cerise. Charlotte is a good fit for him, and their relationship is one between two people who were both previously married and betrayed in some way by those spouses, figuring out if they want a relationship at all.

The main plot is the clearest and most understandable in the whole series (even ON THE EDGE had some weirdness I only understood after several re-reads). Richard and Charlotte meet and have separate reasons to want the slavers dead, then they work on doing that for the whole book in a manner than involves subterfuge, infiltration, a massive attack on a fortress, and then one very high-stakes con to top it all off. This could mean someone would be able to start with this one and understand what's going on, except that part of the reason it can be so clear is because it's working with a fully established world left for it by the first three books. It can be more linear because it doesn't have to stop and explain nearly as many things, and what it does explain fully (e.g. slaver network, Blueblood society, Charlotte's healing/harming magic and backstory) is actually building on already established bits of worldbuilding (e.g. backstory involving slavers, individual Bluebloods, the basic ways magic works). If someone tried to start here, the resolutions Jack and George get would be much less meaningful, Rose and Declan would feel like an afterthought (they already had their story), and the helpful background presence of the Mirror, Kalar, and the rest of the Mars would feel entirely too convenient. When instead viewed in the context of the whole series, they are deeply meaningful moments and chances to see beloved characters and interesting organizations again, having already learned a lot about them. This is where Sophie gets a chance to shine, and her storyline is a mix of backstory that's never shown and events which were pivotal to BAYOU MOON. That combination means that her presence feels complete even if someone hadn't read the other books. 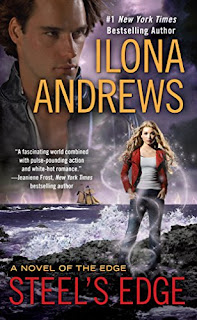