A Clash of Steel by C.B. Lee (Remixed Classics #1)

1826. The sun is setting on the golden age of piracy, and the legendary Dragon Fleet, the scourge of the South China Sea, is no more. Xiang has grown up with stories about the Dragon Fleet and its ruthless leader, a woman known only as the Dragon Queen, all her life. Xiang desperately wants to set sail and explore--mainly to find her father, a presumed dead crew member of the Dragon Fleet. Her only memento of him is a pendant she always wears, a simple but plain piece of gold jewelry.

But the pendant's true nature is revealed when a mysterious girl named Anh steals it, only to return it to Xiang in exchange for her help in decoding the tiny map scroll hidden inside. Rumor has it that the legendary Dragon Queen had one last treasure--the plunder of a thousand ports--hidden away on an island shrouded in mist that only can be seen once in a blue moon.

Xiang is convinced this map could lead to the fabled treasure. Captivated with the thrill of adventure, she joins Anh and her motley crew off in pursuit of the island. But the girls soon find that the sea--and especially those who sail it--are far more dangerous than the legends led them to believe.

*The Remixed Classics series is a collection of YA retellings/remixes, placing classic Western stories in new contexts. Each book is fully stand-alone and can be read in any order.

Xiang feels ignored by her mother, treated as a thing to be kept safe rather than a person who can want things and pursue them competently. She's been surrounded by people paid to teach her and keep her safe, part of a village where she's free to roam to hills and read, but is kept away from anything more adventurous. Her prized possession is a pendant from her presumed-dead father. When her mother agrees to let her try to learn one aspect of the business, it appears as though her mother might finally take her seriously. Instead her mother keeps trying to arrange a marriage for Xiang, a prospect which feels stifling. She meets Anh, a sailor, and feels close to her almost immediately, but takes longer to realize just how different their perspectives are, due to their vastly different life experiences. When she runs away and joins Anh's crew she finds a place where she is valued for what she does and for how she fits into a larger whole.

The worldbuilding leans into a heady mix of clothing, food, and legends of the Dragon Queen's exploits from decades ago. Once she's on the ship, Xiang works to learn as much as she can and revels in the feeling of getting stronger from daily work. There's an emphasis on found family, and in untangling the difference between where you come from and where you feel at home.

I enjoyed this both on its own and as a retelling of Treasure Island. You don't need to be familiar with the original, as this takes the bones of that other story and clads them in something wonderful and new. The ending is tense and dramatic, I like how it wraps things up. 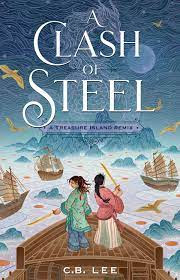