Alanna: The First Adventure by Tamora Pierce (Song of the Lioness #1)

From now on I'm Alan of Trebond, the younger twin. I'll be a knight.

And so young Alanna of Trebond begins the journey to knighthood. Though a girl, Alanna has always craved the adventure and daring allowed only for boys; her twin brother, Thom, yearns to learn the art of magic. So one day they decide to switch places: Thom heads for the convent to learn magic; Alanna, pretending to be a boy, is on her way to the castle of King Roald to begin her training as a page.

But the road to knighthood is not an easy one. As Alanna masters the skills necessary for battle, she must also learn to control her heart and to discern her enemies from her allies.

Filled with swords and sorcery, adventure and intrigue, good and evil, Alanna's first adventure begins - one that will lead to the fulfillment of her dreams and the magical destiny that will make her a legend in her land.

This is a good introduction to Alanna and Tortall, setting up things that will play out fully in later books. The setting is a swords and sorcery fantasy (occasionally both in the same fight) in a vaguely medieval kingdom which various neighbors and internal factions. It also establishes the Bazhir and their complicated relationship with Tortall (partially absorbed through treaties and alliances with individual tribes, but not conquered), with the book's finale set in the desert.

Given that the Bazhir are loosely based on real desert-dwelling peoples (something which becomes abundantly clear in later books), it seems like a not-great thing for their prophecy to involve being saved by two people who come in from outside and fight a great evil which they either couldn't defeat or never tried to stop. Alanna (and probably Jon as well) is learning about the Bazhir for the very first time on the same trip where she and Jon combat this evil. It plays into a long history of white-savior stories in an uncomfortable way.

I first read this when I was Alanna’s age, and I’ve read it dozens of times since then.  Alanna trades places with her twin brother, Thom, so that he can study magic and she can become a knight. In order to pull off the switch, Alanna disguises herself as a boy, and finds herself bonding with a slightly older group of boys who become squires while she’s still a page. She also faces a bully who torments her in her first year, having to figure out the difference between being good at combat and being a bully.

One thing I appreciate about this book is its chapter containing something which was sorely needed in the late 1980’s when this came out and which is still useful today: a brief and useful description of what a menstrual cycle is and how to care for one’s body when it happens. Because Alanna becomes a page at age 10, and only her manservant knows she’s a girl and not the boy she’s pretending to be, when she gets her period she doesn’t know why it’s happening and has to secretly get help to find out what’s going on. It’s handled quickly and with enough detail that someone who needs this information would at least have a starting point. I don’t like how Alanna’s protests about disliking her body’s trajectory are waived away as being what the Gods ordained, but it fits this story in which the Gods are very real, and one Goddess in particular seems to be taking an interest in Alanna.

This is a great start to the series while being a complete story in its own right, covering Alanna's first year of her life as Alan the page. 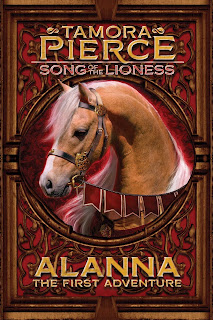