Paladin’s Grace by T. Kingfisher (The Saint of Steel #1)

Stephen's god died on the longest day of the year...

Three years later, Stephen is a broken paladin, living only for the chance to be useful before he dies. But all that changes when he encounters a fugitive named Grace in an alley and witnesses an assassination attempt gone wrong. Now the pair must navigate a web of treachery, beset on all sides by spies and poisoners, while a cryptic killer stalks one step behind...

From the Hugo and Nebula Award winning author of Swordheart and The Twisted Ones comes a saga of murder, magic, and love on the far side of despair.

The White Rat books definitely have a trend towards featuring broody men who are good at stabbing things and carry around an enormous amount of (understandable but often overwrought) guilt. Stephen is no exception to this. He is a paladin whose god died suddenly three years ago, which left people disturbed and confused that a god could die, and triggered berserker rages in many of the paladins. The survivors are now in one of the White Rat’s temples, offering their services as protectors, guards, and whatever else the temple needs where muscled and frequently brooding swordsmen are of use. Grace is a perfumer who has an excellent sense of smell and finds herself rather suddenly in trouble.

Grace is so genuinely trusting that she needs someone more cynical and observant around to keep things from turning out badly when people take advantage of her. She can, and has, reset her life after betrayal, but it's so nice to see a part of her life where people help her rather than leaving her to sink or swim in the wake of abuse and betrayal. Stephen and his fellow paladins are living each day without their god, trying to be helpful rather than letting the black tide swallow them. It's nice to read a story where the main characters have lives separate from each other, but it's obvious how their lives are enriched by each other's company and possible affection. Zale is a fantastic wit and an even better lawyer, it's great to see them again.

This is a romance in a fantasy setting, rather than a fantasy with some romance. Much of the story involves Grace and Stephen figuring out how to actually talk to each other about their feelings. I enjoy slow burn romances in fantasy settings between people who aren't necessarily lying but are bad at communicating, so this was very enjoyable on that front.

While technically not a sequel, this is set in the world of the White Rat, mentions places featured elsewhere, and includes at least one character from SWORDHEART. The story itself is entirely new. The worldbuilding focuses on just a couple of locations, but describes places in a way that provides relevant information for this story while giving details which complement what that other White Rat books established. I recommend reading at least SWORDHEART before this, but the main thing that will affect is whether Zale is a new or familiar character. 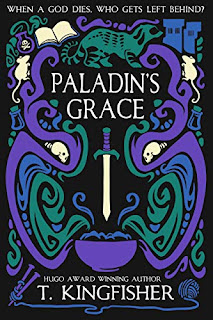