Fans of acclaimed author Kendare Blake's Anna Dressed in Blood will devour Three Dark Crowns, the first book in a dark and inventive fantasy series about three sisters who must fight to the death to become queen.

In every generation on the island of Fennbirn, a set of triplets is born: three queens, all equal heirs to the crown and each possessor of a coveted magic. Mirabella is a fierce elemental, able to spark hungry flames or vicious storms at the snap of her fingers. Katharine is a poisoner, one who can ingest the deadliest poisons without so much as a stomachache. Arsinoe, a naturalist, is said to have the ability to bloom the reddest rose and control the fiercest of lions.

But becoming the Queen Crowned isn't solely a matter of royal birth. Each sister has to fight for it. And it's not just a game of win or lose...it's life or death. The night the sisters turn sixteen, the battle begins. The last queen standing gets the crown.

So that was dark and stressful.

THREE DARK CROWNS doesn't pull punches and lives up to its name. It's the kind of story where if you ask "does the dog die", the answer is not only "yes", but begs the follow-up "do you want to know the fates of any other animals?" In the canon of books where sisters raised apart must fight to the death for only one can be queen, this stands out for having understandable reasons why. There's a goddess who at least supposedly wants everything to go this way, but more importantly there are large, driven, and complex political factions full of individuals pushing for power and prestige. The triplets have been apart from each other and mistreated by their various handlers for nearly a decade, each one being told that the other two will be just as ready to kill her as she must be. The three sisters are very distinct from one another, and their various clusters of friends, allies, and manipulators were fascinating to read.  When things go wrong (and they just keep going wrong) there's a known reason (at least to the reader).

The worldbuilding is detailed and vibrant. The three largest factions each are backing a Queen whose ability matches theirs, but there are two more power-based factions and then the (supposedly neutral) Temple. We learn that sometimes there are four babies instead of three, and other kinds of messiness that the power systems have worked around, redirected, or incorporated to their own ends. I love how these little explanations make it feel like a system that people within it might actually want to perpetuate, which is so vital for a story so full of deadly machinations and impetuous decisions. Arsinoe is my favorite character though I gradually warmed to Katherine and I like her much more by the end. I like how Mirabella is handled, but I didn't warm to her as a person. The Poisoners are my favorite faction, Natalia is a driven and manipulative guardian for Katherine, and Pietyr completes the picture in a way that's good for the plot but doesn't bode well for anyone around him. The nice thing about having the factions and multiple protagonists is it feels like there's room to like and dislike any permutation of characters as people and still enjoy the story.

I love the ending, the last chapter transformed my general interest into needing to get the next book as soon as I feel emotionally recovered from this one. 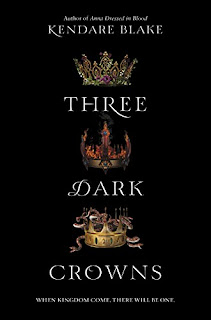