1. Punishment for past actions.

2. An attempt to pay for what can't be bought.

Antimony Price is on the run. With the Covenant on her tail and her family still in danger, she needs to get far, far away from anyone who might recognize her--including her own mice. For the first time in a long time, a Price is flying without a safety net. Where do you go when you need to disappear into a crowd without worrying about attracting attention? An amusement park, of course.

Some people would call Lowryland the amusement park. It's one of the largest in Florida, the keystone of the Lowry entertainment empire...but for Annie, it's a place to hide. She's just trying to keep her head down long enough to come up with a plan that will get her home without getting anyone killed. No small order when she's rooming with gorgons and sylphs, trying to placate frustrated ghosts, and rushing to get to work on time.

Then the accidents begin. The discovery of a dead man brings Annie to the attention of the secret cabal of magic users running Lowryland from behind the scenes. They want the fire that sleeps in her fingers. They want her on their side. They want to help her--although their help, like everything else, comes with a price.

No plan. Minimal backup. No way out. Annie's about to get a crash course in the reality behind the pretty facade. If she's lucky, she'll survive the experience.

*Most editions of TRICKS FOR FREE contain the novella THE RECITATION OF THE MOST HOLY AND HARROWING PILGRIMAGE OF MINDY AND ALSO MORK, which comprises the final seventy or so pages of the book as published.

TRICKS FOR FREE finds Antimony lying low as a worker in an amusement park, immersing herself in corporate jargon and plastered on smiles... until the accidents start.

This book exists, in a lot of ways, to wrap up or at least try to cope with a bunch of stuff that just happened in the previous books. It does have a main storyline which starts here and wasn't present previously, along with several major things which are introduced and resolved. It leaves a pretty major thing to be addressed by later books. The main character is the same as the last book but hasn't been the narrator for the whole series. She's still my favorite narrator so far and feels very different from either of her siblings (the previous narrators). This book would not make sense if someone picked it up at random and didn't know about the series. Not only that, but it relies on backstory established in a companion series (Ghost Roads, start with Sparrow Hill Road). There's a lot of complicated information that matters, the kind that truly relies on the previous book at minimum, or the last two books plus Sparrow Hill Road if possible. This makes for an extremely satisfying character arc for Antimony and a great story if you're up to speed, but probably a less than ideal experience if you're attempting to get into this series by starting here on book seven. As always I do recommend having read the whole Incryptid series so far, but this time it also matters whether you've started the Ghost Roads.

As much as I care whether someone could pick up a particular volume at random in a series, sometimes the answer is emphatically no, and this time it's for very good reasons. This is my favorite book so far, and part of what makes it so good is that it has the context of the entire series behind it. The rest of this review will contain minor spoilers for previous books but no spoilers for Tricks For Free. The books narrated by Antimony's siblings characterized her as the youngest Price, with a penchant for making pit traps and a willingness to bloody her siblings with her antics. MAGIC FOR NOTHING featured Antimony's perspective for the first time, stuck stepping in to try and fix Verity's mess from CHAOS CHOREOGRAPHY. There's she's not an afterthought to her family, but if they could have sent literally anyone else undercover they would have. Instead, for plot reasons, it has to be her. She's supposed to have family support but ends up so dramatically defying the Covenant (in a move more dramatic than Verity's but at least not on live television) and has to flee. Now, in TRICKS FOR FREE, she's on her own as much as anyone with a ghostly pseudo-babysitter can be. She gets to showcase how she acts when she's not under her siblings' shadows, when she has some friends and allies but few resources (and even fewer knives). I think she really shines here, mentioning her family in her narration but no longer obsessed with how she does or does not stand out from her siblings generally and Verity in particular. I like her friends, I like the recurring characters who show up in the clinch, and I love this book. 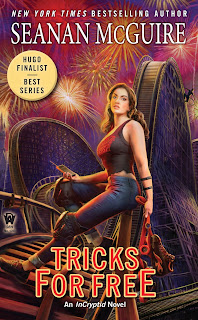