Sarah Zellaby has always been in an interesting position. Adopted into the Price family at a young age, she’s never been able to escape the biological reality of her origins: she’s a cuckoo, a telepathic ambush predator closer akin to a parasitic wasp than a human being. Friend, cousin, mathematician; it’s never been enough to dispel the fear that one day, nature will win out over nurture, and everything will change.

Maybe that time has finally come.

After spending the last several years recuperating in Ohio with her adoptive parents, Sarah is ready to return to the world–and most importantly, to her cousin Artie, with whom she has been head-over-heels in love since childhood. But there are cuckoos everywhere, and when the question of her own survival is weighed against the survival of her family, Sarah’s choices all add up to one inescapable conclusion.

This is war. Cuckoo vs. Price, human vs. cryptid…and not all of them are going to walk away.

*Most editions of IMAGINARY NUMBERS contain the novella FOLLOW THE LADY, which comprises the final fifty or so pages of the book as published.

IMAGINARY NUMBERS is the kind of book you wait all series to get, but can only achieve so triumphantly with the necessary eight books of prelude to make it all so satisfying. The cryptids all other cryptids fear have turned their attention to Sarah with a problem only she can solve. Is anyone truly ready for the answer?

This is my favorite so far. I think I've said that for the past few reviews, and I still love Antimony as a narrator, but I've been waiting for everything in this book since the beginning. It has Johrlacs, it has Sarah, it has Artie. It has Artie and Sarah! I've wanted Sarah as a narrator since she was first introduced to the series, Babylon 5 lent her a moral code and it gave me my love of telepaths, so this was very exciting for me personally. I'm glad to meet Artie in the context of Sarah, since the series has teased the reality of their close friendship and the potential of a romantic relationship so much without giving many details about what Artie is actually like. It was a little strange to be centered around a different branch of the family with everyone's titles shifting around, but I got used to it pretty quickly.

This wraps up a few things left hanging from the last book, but the main thing that is does in terms of continuing existing plot threads is finally introduce Sarah's perspective, and give a lot more information about Johrlacs. I've been waiting for Sarah's in particular for a long time, basically since she first appeared at the beginning of the series. The main storyline starts here and wasn't present in the last one, but the setup before the inciting incident is the culmination of events from almost the beginning of the series. I'm having a little trouble assessing whether it has a major thing introduced and resolved here, because it has a real "part one of two" feeling, especially given how it ends. Lots of major things are introduced, and then transformed, but not all the way resolved. It's far enough into the series that I'm very happy about this, it's time for a cliffhanger and the series can handle it (whether I can handle it is a separate question, I need the next book immediately). The narrator changed, we actually get two narrators this time. I won't spoil who the second one is. Occasionally I had trouble telling who was narrating when it switched, but I generally knew within two pages. It only switches at chapter breaks, so that helped. This would not make sense if someone started here and didn't know about the series already. As I mentioned previously, this follows up something that had a very dramatic start early in the series and has been developing in the background for a long time. It then uses that to set up a bunch of information that anyone who's been reading along will be very excited to learn... but would feel like a massive and possibly unwieldly infodump for anyone who tries to start here. Sarah's story has been so important to the other stories, even if she's just in the background (like in Antimony's books) that this will read very differently to anyone who tries to make this their starting point.

I loved the new information about the Johrlacs, it's spread out through the text enough to be very satisfying for anyone keeping up with the series. It's everything I've wanted to know and more, and it's all so so relevant to the plot.

This has a really great and funny way to casually learn that a minor character is queer, it's a tiny moment but I think it's my favorite non-traumatic thing in the book.

I think the ending is perfect for the book, but it's emotionally terrible for me because I hate having to wait for cliffhangers, so I'm glad I'm reading this when the next book is already released. It's truly the best way for this to end, because the stuff set up here is too much to have fit neatly into one book. It needs room to breathe and this gives it that narrative space... and I'll be reading this next one as soon as I possibly can. 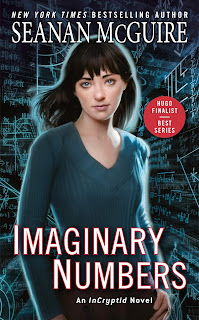