Magic for Nothing by Seanan McGuire (Incryptid, #6)

1. Not very likely to happen; not probable.

As the youngest of the three Price children, Antimony is used to people not expecting much from her. She's been happy playing roller derby and hanging out with her cousins, leaving the globe-trotting to her older siblings while she stays at home and tries to decide what she wants to do with her life. She always knew that one day, things would have to change. She didn't think they'd change so fast.

Annie's expectations keep getting shattered. She didn't expect Verity to declare war on the Covenant of St. George on live television. She didn't expect the Covenant to take her sister's threat seriously. And she definitely didn't expect to be packed off to London to infiltrate the Covenant from the inside...but as the only Price in her generation without a strong resemblance to the rest of the family, she's the perfect choice to play spy. They need to know what's coming. Their lives may depend on it.

But Annie has some secrets of her own, like the fact that she's started setting things on fire when she touches them, and has no idea how to control it. Now she's headed halfway around the world, into the den of the enemy, where blowing her cover could get her killed. She's pretty sure things can't get much worse.

Antimony Price is about to learn just how wrong it's possible for one cryptozoologist to be.

MAGIC FOR NOTHING takes Antimony double-undercover as her infiltration of the Covenant sends her to join a circus and investigate some disappearances with the help of borrowed knives and some unexpected friends.

Antimony is my favorite narrator so far. Her descriptions are fantastic on their own, but part of what she brings to the series canon of the family is a view of the various members that feels very different from Verity and Alex. After five books reducing her to the pit trap girl who also skates, understanding why she's that way was really great, without outright contradicting the essence of her siblings stories about their childhoods. It's askew in the way that people who were all present will remember thing differently because they're not the same person and they cared about different pieces. I love Sam as a character, his initial surliness has a very understandable and non-malicious reason, and the way he slowly warms to Antimony felt natural. It took long enough to be believable but didn’t take so long as to drag. I’m creeped out by Leo, he’s a surprisingly deep character who I would never want to be around but I enjoy reading about.

The roller derby descriptions were great, with the level of detail which implies either a personal history or excellent research (jams are closer to downs than innings, but that's a minor quibble). This was the first sport/activity in this series where I'm familiar enough to weigh in on accuracy, so I enjoyed that. I also loved the circus info, but there I have zero ability to weigh in.

This doesn’t specifically wrap up anything left over from the previous book, but the inciting incident was the finale of CHAOS CHOREOGRAPHY, and this is about how the Price family reacts to Verity’s very public actions. The main storyline starts here and wasn’t present previously, and a few major things are introduced and resolved in this volume. It’s not the last book and it leaves some specific things to be addressed later. Antimony’s voice is very distinct from the previous narrators (her siblings) and she’s my favorite so far. Her style is a little more wry and a lot more realistic than Verity, and her thoughts about her siblings as people are more complex than her siblings’ characterizations of her, in a way that made them really feel like a family paying different levels of attention to each other. The main plot would mostly make sense if someone picked this up at random and didn’t know about the series, but if someone were to start mid-series then CHAOS CHOREOGRAPHY would be a better place (as always I recommend starting with book one if you have the option). Both books are mostly self-contained but the whole reason for the events of MAGIC FOR NOTHING to exist is because of the ending of CHAOS CHOREOGRAPHY, and reading it without that backstory would lose a lot of the emotional context.

If you've loved the series so far, definitely read this one. If following a family of cryptozoologists who are constantly undercover and occasionally double-undercover sounds like your thing, don't miss the series. 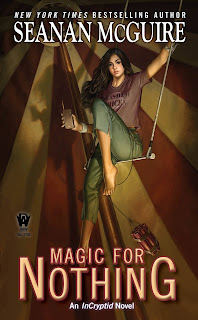