A Case of Possession by K.J. Charles (A Charm of Magpies, #2)

Magic in the blood. Danger in the streets.

Lord Crane has never had a lover quite as elusive as Stephen Day. He knows Stephen’s job as justiciar requires secrecy, but the magician is doing his disappearing act more than seems reasonable—especially since Crane will soon return to his home in China. When a blackmailer threatens to expose their illicit relationship, there's only one thing stopping Crane from leaving the country he loathes: Stephen.

Stephen has problems of his own. As he investigates a plague of giant rats sweeping London, his sudden increase in power, boosted by his blood-and-sex bond with Crane, is rousing suspicion that he’s turned warlock. With all eyes on him, the threat of exposure grows. Stephen could lose his friends, his job and his liberty over his relationship with Crane. He’s not sure if he can take that risk much longer. Crane isn’t sure if he can ask him to.

The rats are closing in, and something has to give…

Includes the short story A CASE OF SPIRITS.

A CASE OF POSSESSION is a great sequel, continuing the romance from THE MAGPIE LORD while maintaining a similar body count. Covert lovers solving a murder is a very scintillating combination and it works well.

The story balance between their relationship and solving the actual murders is artful, so perfectly balanced. I love the rapport between the main characters and it's so great to see both of them in the context of other people they know and/or work with.

This doesn't really wrap up anything left hanging from the first book, the main thing it continues is the ongoing relationship between the main characters but that definitely doesn't end here. The entire storyline starts in this volume and wasn't present previously, and the main plot is introduced and resolved within this book. It doesn't leave anything specific to be picked up later in terms of the specific plot, but since this is a paranormal romance series, the relationship itself is the throughline and definitely has more to be explored. The main characters haven't changed and the POV character is the same. The previous book alternated between Stephen and Crane, but this one is just Crane because it's focused on his perspective on their relationship, and a lot of the tension from that is the uncertainty caused by the way Stephen comes and goes with no notice. Crane's narrative voice is consistent with the previous book. This would mostly make sense if someone read it without the first book, though of course the relationships already in place would lack some of the backstory from before.

This continues the mix of magic, trauma, catharsis, and very steamy sex which made the first book so good, I'll definitely finish reading the trilogy.

CWs for A CASE OF SPIRITS: alcoholism, gore, death. 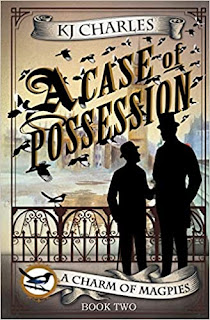