The Afterward by E.K. Johnston

It has been a year since the mysterious godsgem cured Cadrium’s king and ushered in what promised to be a new golden age. The heroes who brought the gem home are renowned in story and song, but for two fellows on the quest, peace and prosperity do not come easily.

Apprentice Knight Kalanthe Ironheart wasn't meant for heroism this early in life, and while she has no intention of giving up the notoriety she has earned, her reputation does not pay her bills. With time running out, Kalanthe may be forced to betray not her kingdom or her friends, but her own heart as she seeks a stable future for herself and those she loves.

Olsa Rhetsdaughter was never meant for heroism at all. Beggar, pick pocket, thief, she lived hand to mouth on the city streets until fortune--or fate--pulled her into Kalanthe's orbit. And now she's quite reluctant to leave it. Even more alarmingly, her fame has made her recognizable, which makes her profession difficult, and a choice between poverty and the noose isn't much of a choice at all.

Both girls think their paths are laid out, but the godsgem isn't quite done with them and that new golden age isn’t a sure thing yet.

In a tale both sweepingly epic and intensely personal, Kalanthe and Olsa fight to maintain their newfound independence and to find their way back to each other.

In THE AFTERWARD, the heroes have to live somehow when the big quest is done: A thief too well-recognized to pull off a heist and a knight who must marry as the price of her armor. Told in alternating sections between Before and After, THE AFTERWARD shows how if the journey changes you until you can never really go home again, you had best make something new with those you love.

I love the way the Before sections don't try too hard to convey the precise details of the quest from a year ago. It shows glimpses to provide context for the After sections, but it's much more loosely connected and feels like it covers much more time than the more focused After section. In the After, Kalanthe and Olsa are trying to figure out what happens after they became big damn heroes at seventeen but still have to live the rest of their lives. The heart of the story is each of them figuring out whether the romance they had on the road can be part of their future. The two parts of the book are really well balanced and I loved the overall effect.

This book has a quest, but it is not, fundamentally, a book about a quest. It's about two young women who were in love and probably still are, taking the time to do things on their own for a while. I love the setting, I love the characters, I just had so much fun reading this that I didn't want it to be over.

The rest of this review briefly discusses some medical conditions portrayed in the book and contains minor spoilers.

As someone who had a traumatic brain injury, I appreciated the representation here. Thankfully I'm more recovered than the character living with a magically induced TBI in the After section, but the modified hood she wears and the way she frankly discusses the way she's living with her particular TBI were really cathartic to read.

There is a character with an aneurism, who knows he has one and dies from it during the story. His exit is plot-convenient, but he also existed in the first place to help resolve some problems for one of the main characters. He gets what, for him, is explicitly the best possible ending, but I don't know if this portrayal might be distressing for people who know that they share his medical condition. 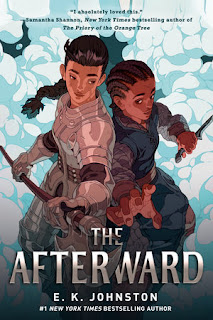