The Girl in the Greek Silk Gown by Seanan McGuire (Ghost Roads, #2)

Once and twice and thrice around,

Put your heart into the ground.

Give your love unto the dead.

Seven shadows on the wall,

Eight have come to watch your fall:

And the last is for the one you'll never save.

For Rose Marshall, death has long since become the only life she really knows. She's been sweet sixteen for more than sixty years, hitchhiking her way along the highways and byways of America, sometimes seen as an avenging angel, sometimes seen as a killer in her own right, but always Rose, the Phantom Prom Date, the Girl in the Green Silk Gown.

The man who killed her is still out there, thanks to a crossroads bargain that won't let him die, and he's looking for the one who got away. When Bobby Cross comes back into the picture, there's going to be hell to pay--possibly literally.

Rose has worked for decades to make a place for herself in the twilight. Can she defend it, when Bobby Cross comes to take her down? Can she find a way to navigate the worlds of the living and the dead, and make it home before her hitchhiker's luck runs out?

There's only one way to know for sure.

Nine will let you count the cost:

All you had and all you lost.

Ten is more than time can tell,

Cut the cord and ring the bell.

Count eleven, twelve, and then,

And the last is for the blessing of Persephone.

In THE GIRL IN THE GREEN SILK GOWN, Rose has to find her way back to the roads she loves after Bobby Cross, the man who killed her sixty years ago, disturbs her wanderings in the Twilight.

I enjoyed THE GIRL IN THE GREEN SILK GOWN as a more straightforward narrative after the connected short story structure of SPARROW HILLL ROAD (I like them both, but while the short stories were good as an introduction to Rose's world, I do prefer the familiar structure of a novel). The mythology of the Ghost Roads is fascinating and it was nice to get a more focused version of it here, as well as more information about this series' version of Persephone. Rose is a great narrator and Bobby is a terrifying villain casting a long shadow. It feels like the first book was more about introducing the roles played by the denizens of the Twilight and the Daylight who fill Rose's time, and then this circled back to spend a lot more time with a few of them as people, not just their situations.

This wraps up a pretty major thing left hanging from the first book. The main storyline starts here and wasn't present previously. There are several major things introduced and resolved in this volume. It's not the last book and it leaves a very major thing to be picked up by any sequels. The main character is the same as in the previous books. I think the main plot would mostly make sense if someone picked this up and hadn't read the first book, but it uses a lot of terms for a bunch of different types of ghosts and sometimes the emotional tension in a moment depends on things like  understanding just why summoning a crossroads ghost would be a very bad idea, something that's a little harder to resonate with if you skipped book one. It also depends on two people with some bad history having to work together, and the first book is where that bad history is established. It might make sense without that knowledge, but if something is confusing here and you didn't read SPARROW HILL ROAD, you'll probably find your answers there (for what remains unanswered, read the Incryptid series). 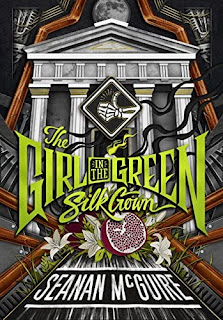