The Pale Dreamer by Samantha Shannon (The Bone Season, #0.5)

In the perilous heart of Scion London, a dangerous and valuable poltergeist is on the loose – and it must be caught before chaos erupts on the streets of the capital. Here, the clairvoyant underworld plays by its own rules, and rival gangs will stop at nothing to win such a magnificent prize.

Sixteen-year-old Paige Mahoney is working for Jaxon Hall, the most notorious mime-lord in the city. He thinks she is hiding a powerful gift, but it refuses to surface. Maybe this is the opportunity she needs to secure her position in his gang, the Seven Seals…

This novella is included with some editions of THE BONE SEASON.

THE PALE DREAMER is a nice prequel to THE BONE SEASON, showing Paige's early days with The Seven Seals. I recommend reading this after THE BONE SEASON, it's not the kind of prequel that stands on its own well, but I enjoyed reading immediately afterwards as a way to see Paige as she was before the events of the main story. 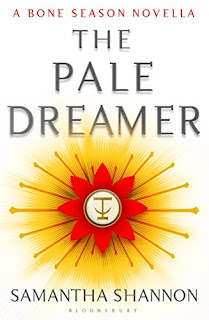