The people of Uztar have long looked to the sky with hope and wonder. Nothing in their world is more revered than the birds of prey and no one more honored than the falconers who call them to their fists.

Brysen strives to be a great falconer--while his twin sister, Kylee, rejects her ancient gifts for the sport and wishes to be free of falconry. She's nearly made it out, too, but a war is rolling toward their home in the Six Villages, and no bird or falconer will be safe.

Together the twins must journey into the treacherous mountains to trap the Ghost Eagle, the greatest of the Uztari birds and a solitary killer. Brysen goes for the boy he loves and the glory he's long craved, and Kylee to atone for her past and to protect her brother's future. But both are hunted by those who seek one thing: power.

In this first young-adult fantasy novel in a trilogy, Alex London launches a soaring saga about the memories that haunt us, the histories that hunt us, and the bonds of blood between us.

In BLACK WINGS BEATING where there are no good options and death is only a poorly-timed argument away, two siblings must brave the mountain to capture the eagle which killed their abusive father, and perhaps find themselves.

This is an emotional roller coaster. The main characters are really well established early on and then their needs and desires just... crash into each other over and over until they finally start to work together once it gets through their heads that being right might be less important than making it out alive. There are occasional scenes from other characters' perspectives, but the main two are the twins, Kylee and Brysen. The sibling dynamic between them felt tangled and genuine and I like getting both of their perspectives as narrators. The emotional core of this book is that strained sibling relationship, and what it means for them to keep going after the all-consuming presence of their abuser is gone. They start the book not wanting him back but also not quite knowing what to do with the pieces left behind and the spaces he no longer fills. It's messy and complicated, and I love where the story goes with it.

The siblings' relationship is particularly good, but there are a lot of relationships and they're handled with nuance. Some of them are pretty positive and some are extremely negative, but they're all complicated. They hit the sweet spot of being complex enough to imply a lot of emotional depth that there might not be enough time to explore fully, while also being very easy to sum up. Everything from "probably unrequited crush" to "sister thinks her brother's older boyfriend is just using him", they have space to develop. There's definitely a theme of loving someone who can't or doesn't love you back, explored in a bunch of different ways.

This is a bloody book with a very high body count. It maintains the tension that anyone could die by following through and having a lot of people (and birds) die. I never felt like the violence was gratuitous in terms of what the narrative needed, the most gruesome scenes were establishing important things about various characters' approach to violence and their relative willingness to kill to make a point.

I loved this and I'll definitely check out the sequel, I'm very interested in what happens next. 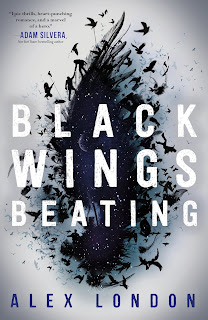