The Cost of Knowing by Brittney Morris

Sixteen-year-old Alex Rufus is trying his best. He tries to be the best employee he can be at the local ice cream shop; the best boyfriend he can be to his amazing girlfriend, Talia; the best protector he can be over his little brother, Isaiah. But as much as Alex tries, he often comes up short.

It’s hard to for him to be present when every time he touches an object or person, Alex sees into its future. When he touches a scoop, he has a vision of him using it to scoop ice cream. When he touches his car, he sees it years from now, totaled and underwater. When he touches Talia, he sees them at the precipice of breaking up, and that terrifies him. Alex feels these visions are a curse, distracting him, making him anxious and unable to live an ordinary life.

And when Alex touches a photo that gives him a vision of his brother’s imminent death, everything changes.

With Alex now in a race against time, death, and circumstances, he and Isaiah must grapple with their past, their future, and what it means to be a young Black man in America in the present.

THE COST OF KNOWING is about the time stolen from young Black men who don't get to be Black boys, torn between fear of the future and dread of the past while trying not to miss the present.

This is gripping and immersive, the recursive cadence of Alex's visions as he attempts to get through his day disrupt his peace and raise his anxiety while creating a very distinctive feeling in the text. Alex thinks a lot about the way he's grown up, how much he doesn't feel like a man but he also doesn't get to be a kid, be a teenager. It's obvious how much the way he treats his brother as the plot takes off is driven by a desire to let Isaiah actually be a kid, to not have to shoulder the burdens he has.

The interstitials at first seemed like an odd start to a book, but by the time I saw those simple lines for the last time they filled me with dread. The brevity and starkness reveal how those characters see themselves, set against the emotion-drenched detail of the rest of the story as we learn how Alex sees them when he thinks of them at all. I don't mean to be coy, I just don't want to spoil what the interstitials are or who they're describing, since I think that realization is important, whether you know immediately or it takes all the way until the end.

The ending is perfect for this book. I wanted things to be different for the characters I'd gotten to know, but the book never tricked me and I could see (and dread) it coming from far away. It slowly changes from knowing the inevitable and doing things anyway, to not letting fear of what seems inevitable keep you from living. My attempts to describe the point feel flimsy, and the only succor I can offer is that if I have intrigued you, you should read this book. Read this story of Black boy joy and grief amidst it all, because waiting until it's over means missing everything. 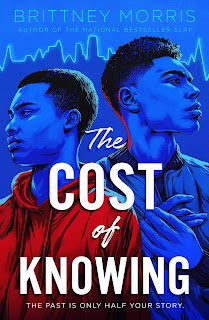