Paloma High School is ordinary by anyone’s standards. It’s got the same cliques, the same prejudices, the same suspect cafeteria food. And like every high school, every student has something to hide—from Kat, the thespian who conceals her trust issues onstage, to Valentine, the neurotic genius who’s planted the seed of a school scandal.

When that scandal bubbles over, and rumors of a teacher-student affair surface, everyone starts hunting for someone to blame. For the seven unlikely allies at the heart of it all, the collision of their seven ordinary-seeming lives results in extraordinary change.

SEVEN WAYS WE LIE follows seven high-schoolers as the possibility of a teacher-student romance consumes the school's rumor mill, told in rotating perspectives as they decide what to hide and what to tell when things get complicated.

All seven main characters are messy and flawed in different ways, and it wasn’t until I finish the entire book and then looked at the cover that I realized that each of them embodies one of the seven deadly sins, but it works really well even without that knowledge. I love tracing tracing the thread up an event across the different characters' perspectives, piecing together who knew what and when. It has the vibe of a mystery story, partly because for a long time there is a mystery that people are trying to figure out, but it's driven by all the ways that these seven kids are interacting and how their various problems, traumas, and insecurities collide. I love this book in spite of a few flaws, which feels kind of like the best way to love this particular story.

The rotating perspectives meant that whenever I was frustrated with how one character handled something the story usually was handed off pretty quickly to a different narrator who was also frustrated with how the character had handled it. They all feel like teens, and I am in awe of how this book has seven perspectives who all feel very distinct and were pretty easy to keep track of it in my head. Their writing styles and word choice are different, and what they did or did not know at each point is usually clear.

I love the way it handles each of the characters' problems, untangling the difference between what they think is wrong and what's actually going on. Each of the narrators is unreliable individually, but the combination of their biases and assumptions (plus the ways they do or don't find out they were incorrect about someone else) builds together into what feels like a complete picture of what happened (or at least as close as it's possible to get). It gives each character the space to just be really wrong about something (and right about something else) without that tension pulling the book apart. My favorite characters are Lucas, Kat, and Valentine, but my favorite in terms of personal growth and regaining agency is Olivia. Every one of them matters to the story, and even the one I really don't like as a person is integral in ways that make the whole book better.

This book contains multiple instances of the term “slut-shaming” in the context of a teenage girl being shamed for her sexual autonomy and then gradually working to reclaim her sense of agency. 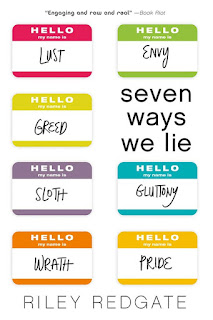