1. A place where two roads cross.

2. A place where bargains can be made.

Antimony Price has never done well without a support system. As the youngest of her generation, she has always been able to depend on her parents, siblings, and cousins to help her out when she’s in a pinch—until now. After fleeing from the Covenant of St. George, she’s found herself in debt to the crossroads and running for her life. No family. No mice. No way out.

Lucky for her, she’s always been resourceful, and she’s been gathering allies as she travels: Sam, fūri trapeze artist turned boyfriend; Cylia, jink roller derby captain and designated driver; Fern, sylph friend, confidant, and maker of breakfasts; even Mary, ghost babysitter to the Price family. Annie’s actually starting to feel like they might be able to figure things out—which is probably why things start going wrong again.

New Gravesend, Maine is a nice place to raise a family…or make a binding contract with the crossroads. For James Smith, whose best friend disappeared when she tried to do precisely that, it’s also an excellent place to plot revenge. Now the crossroads want him dead and they want Annie to do the dirty deed. She owes them, after all.

And that’s before Leonard Cunningham, aka, “the next leader of the Covenant,” shows up…

It’s going to take everything Annie has and a little bit more to get out of this one. If she succeeds, she gets to go home. If she fails, she becomes one more cautionary tale about the dangers of bargaining with the crossroads.

*Most editions of THAT AIN'T WITCHCRAFT contain the novella THE MEASURE OF A MONSTER, which comprises the final seventy or so pages of the book as published.

THAT AIN'T WITCHCRAFT handles multiple antagonists with aplomb, shifting and settling until strangers become friends, enemies... stay pretty hostile but at least understand each other better, and the crossroads reap what they sowed.

I loved this one, I was giddy with joy when reading and I love how it turns out. It's been amazing seeing Antimony change from resenting her siblings to thinking of herself as her own person in context with them but not dependent on their reactions to her. This happens partially because she literally can't contact them right now, and hasn't been able to for a while, but I love the character growth that's happened with her as narrator. Her relationship with Sam develops in a new context with different stressors and they get a chance to figure some things out. In terms of worldbuilding, this explores and explains facets of this setting which had been unquestioned until now, handed down by Healy's and Price's to the reader. It makes me so happy when new information makes gives a reason for something previously unexplained or unquestioned without invalidating the little bits of information which were available before, and this does that for a bunch of things. This book also changes some major things for the related Ghost Roads series, so I'll be excited to read how future entries there are affected by events in this one. James is great, I like James and I'm very happy with how Antimony handles the mess that was Sam, James, and Returning Antagonist all being in the same space, all with very different expectations for how things are going to go.

This wraps up things left handing from the previous book, and actually handles several threads going at least two books back. The main storyline starts here and wasn't present previously, though the reason for that storyline to appear at all is very embedded in the previous two books. There are several major things introduced and resolved here. The main character is the same as the last two books, and her voice is consistent. It's also very distinct from the other narrators in the series. This wouldn't make a lot of sense if someone started with this book and didn't know about the series, so much so that there's a moment which feels like it bends the fourth wall a bit when someone who is new to the series comments on how much there is to know just to be able to address the current problem. This book exists to handle things which began in MAGIC FOR NOTHING... which itself exists because of the very dramatic finale of CHAOS CHOREOGRAPHY. This series does have landing points where new readers could jump in and be okay, but THAT AIN'T WITCHCRAFT is not one of them. Additionally, the sequence which is MAGIC FOR NOTHING, TRICKS FOR FREE, and THAT AIN'T WITCHCRAFT interacts with the Ghost Roads series, and enjoyment of this book is much enhanced by having at least read SPARROW HILL ROAD. If you liked the description of this book please read the whole series, since this particular volume is not a good starting point (nor is it meant to be).

I'm personally pleased by the roller derby, getting to see Antimony in the context of other derby girls even if they're far away from their familiar tracks. It matters to the story that she's a skater and two of her current companions play derby, but in a way that I think would be understandable to someone who was introduced to this sport through this series. The emotional core is highlighted, and the specific details of what makes derby different from cheerleading, for example, are used to highlight the strengths of both combined in Antimony's past to set her up for what's happening now.

This is my favorite in the series so far. Antimony is definitely my favorite narrator, followed closely by Alex, then Verity (I do feel like Antimony's opinion of Verity has influenced my own somewhat, at least for now). 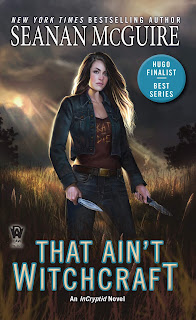