Bridge to Terabithia by Katherine Paterson

Jess Aarons' greatest ambition is to be the fastest runner in his grade. He's been practicing all summer and can't wait to see his classmates' faces when he beats them all. But on the first day of school, a new girl boldly crosses over to the boys' side and outruns everyone.

That's not a very promising beginning for a friendship, but Jess and Leslie Burke become inseparable. Together they create Terabithia, a magical kingdom in the woods where the two of them reign as king and queen, and their imaginations set the only limits.

BRIDGE TO TERABITHIA is about friendship, loneliness, sexism, bullying, rural isolation, and grief. Jesse is a lonely boy with too many sisters who meets a kid named Leslie, together they make invisible castles in the trees, learning that even their bullies have bullies and nothing lasts forever.

Reading this as an adult, I'm struck by how Jesse thought that Leslie was making up from scratch stories like Moby Dick and Hamlet, it's just one small moment that exemplifies how good this book is at relaying through Jesse things that he doesn't actually understand but just tells like he sees them, allowing a younger reader to follow his thoughts as a fellow kid, or for an older one to understand the bits he missed. Leslie and Jesse bump into sexism and gendered constraints, often pushing through them and sometimes having to keep their heads down and fit in a bit longer. The kids feel like kids, not always saying or doing the right thing but trying their best. I like the way Jesse's relationship with his younger sister changes throughout the book, especially at the end when he's actively working to be a better brother to her and prompting her to be a better sibling to their even younger sister who's still a toddler.

I probably wouldn't give this particular book to kids now, mainly due to ableist language which is unchallenged in the text, but it meant a lot to me when I first read it. It's the kind of book that haunts long after you put it down.

This book is famous for a shocking event that occurs near the end and transforms the tone of the book. This review contains spoilers from here on out.

BRIDGE TO TERABITHIA is not free of trauma before the death. One could argue that it hints at the possibility by having the kids discuss the idea of death several chapters before it becomes suddenly relevant. Part of the point is that it's sudden. That it's sudden, and unfair, and it rocks Jesse's sense of how the world is, how it ought to be. Jesse's numb grief and conflicted emotions reactions to being unable to see Leslie again, along with his bursts of anger when his younger sister pesters him about it, make it feel very real. I'm glad that we're (hopefully) past the point that this book where the gender non-conforming atheist character dies might be the only queer representation one someone's shelf. 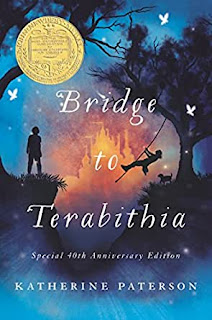