A dreamer who can start a revolution.

For the past two hundred years the Scion government has led an oppressive campaign against unnaturalness in London. Clairvoyance in all its forms has been decreed a criminal offence, and those who practise it viciously punished. Forced underground, a clairvoyant underworld has developed, combating persecution and evading capture. Paige Mahoney, a powerful dreamwalker operating in the Seven Dials district of London, leads a double life, using her unnaturalness illegally while hiding her gift from her father, who works for the Scion regime...

*Some editions of THE BONE SEASON contain the prequel novella THE PALE DREAMER, which comprises the final seventy or so pages of the book as published.

THE BONE SEASON is a slow burn fantasy of capture and escape in magical future England where clairvoyants are hunted for existing, Paige must lend a little trust to her captor if she wants to make it out alive.

I wanted to read a slow burn fantasy novel, something I could pick up and put down over the course of at least a month and not worry about getting confused or missing plot points because I'd taken breaks to read other things. This fit my needs perfectly and I loved it! The pacing is excellent, starting by dropping the reader into Paige's world just as everything is upended, tossing her into a setting that's a strange for her as it is for the reader, then watching as tiny pieces shift until things are set for the very dramatic conclusion. I believe every minute of her six months in this strange place, the text perfectly conveyed the kind of sameness that comes from the monotony of always being in danger, but with her concerns and situation changing subtly so that I was never bored as a reader. It took at least a hundred pages to feel like I know this world, but now I feel it in my bones, settling in through a hundred different moments and tense exchanges, held together by Paige's thoughts of home and worries of her captors. The timeframe also meant her magical training and new skill felt realistically hard-won as the book progresses.

Paige talks so much about the friends she left behind that by the time they're specifically relevant to the plot it feels like I know them already. At first it felt odd to get so much info about people I didn't know if I'd ever see, but how much Paige cares about them and thinks about them informed my understanding of her and how she sees her place in this corner of the world.

I loved this and I'm planning to read the sequel!

***A minor spoiler: Given that the main romance teased in the book is between the main character and one of her captors, I'm especially grateful for the slow pace and excellent character work in the long road between her first meeting him and something romantic finally happening in a space free of coercion. It needs that slower pacing in order to feel right, and it definitely worked for me. 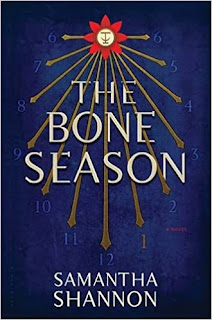