I am where dead children go.

Okiku is a lonely soul. She has wandered the world for centuries, freeing the spirits of the murdered-dead. Once a victim herself, she now takes the lives of killers with the vengeance they're due. But releasing innocent ghosts from their ethereal tethers does not bring Okiku peace. Still she drifts on.

Such is her existence, until she meets Tark. Evil writhes beneath the moody teen's skin, trapped by a series of intricate tattoos. While his neighbors fear him, Okiku knows the boy is not a monster. Tark needs to be freed from the malevolence that clings to him. There's just one problem: if the demon dies, so does its host.

THE GIRL FROM THE WELL is a ghost story from the perspective of the haunter, helping a boy get free from the spirit under his skin, punishing the murderers of children along the way.

I love Okiku as a narrator, the way the text occasionally stutters and jumps to convey her mood helps to build tension. The way Okiku feels like a strange mix between deeply invested narrator and impartial observer meant that I would often forget that this was from her perspective, only to have that illusion broken when she counted things or the text caught and jumped because something interesting or stressful happened. The lulls where I briefly forgot it was her helped to build tension, though I think it would be differently good form of tension if someone were very aware of her ghostly status.

One of my favorite things is how she keeps doing the avenging ghost thing she's been doing for hundreds of years. Like, she'll be doing things in furtherance of the main plot, and then go away from the human secondary characters and take care of some vengeance and then come back. It helps to make her history feel real instead of having her immediately halt everything for this one person. The story is about how knowing him changes her, but it happens gradually without erasing who she is. The aftercare is good, conveying the characters moving on and healing afterwards.

I liked this a lot and I'll definitely read the sequel, the way the status quo changes is intriguing and I want to know what happens next. 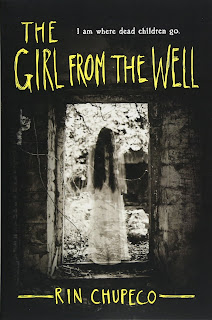