The Sound of Stars by Alechia Dow

Can a girl who risks her life for books and an alien who loves pop music work together to save humanity? A beautiful and thrilling debut novel for fans of Marie Lu and Veronica Roth.

Two years ago, a misunderstanding between the leaders of Earth and the invading Ilori resulted in the deaths of one-third of the world's population.

Today, seventeen-year-old Ellie Baker survives in an Ilori-controlled center in New York City. With humans deemed dangerously volatile because of their initial reaction to the invasion, emotional expression can be grounds for execution. Music, art and books are illegal, but Ellie still keeps a secret library.

When young Ilori commander M0Rr1S finds Ellie's library, he's duty-bound to deliver her for execution. The trouble is, he finds himself drawn to human music and in desperate need of more.

Humanity's fate rests in the hands of an alien Ellie should fear, but M0Rr1S has a potential solution--thousands of miles away. The two embark on a wild and dangerous journey with a bag of books and their favorite albums, all the while creating a story and a song of their own that just might save them both.

Two years after the invasion and near-total genocide of humanity, and alien and a human bond over the power of music and a love of stories while they try to save the people who are left.

I love Ellie and I like Morris, their relationship takes enough time to deepen for it to not feel like trauma bonding, which is really important given the massive power gap when he's part of the alien invasion and she's trying to survive. This does a lot of great things well that I haven't seen much in YA, from frank and non-judgmental discussions of whether they've had other partners, to actually addressing how dressing for the apocalypse results in some physically uncomfortable and very hodge-podge outfits.

This has lot of really great characterization. Ellie repeatedly uses a calming technique to try and avoid panic attacks in stressful situations, or try and calm down when one is starting. I loved this narrative choice, because it conveys how anxious she is without constantly relaying her anxious thoughts. Switching between two narrators helps keep the lying from getting too stressful, especially when there are things that Morris doesn’t feel like he can tell Ellie, or Ellie isn’t ready to trust Morris with. They’re reliable narrators as individuals, but not always to each other, especially in part two, but part of the point of the story is how they work though that and learn to trust each other as they get closer. Part One felt a bit uneven with a lot of infodumps and a lot of explanations. It was trying to handle a lot of world-building really quickly, and it did a pretty good job, it just wasn’t to my personal tastes. Part Two had more room to maneuver now that the backstory was set up, and got into the first phase of the adventure. It also features a different kind of tension between the protagonists. Part Three focuses on the way their relationship is changing, and Part Four is about a final confrontation and what happens next. I liked the second half better than the first, but the plot arc is solid and I'm pretty happy with how it turns out.

I think I would love this book rather than just like it if I cared more about music. The story is extremely up front about being a love/save-the-planet adventure about connecting through music and books, and I loved the book bits and didn't care about the music bits, but they seemed to be well done. It's definitely a me thing, not anything wrong with the story. If you're a bit meh about music and connecting with people through it, then this won't be the book for you. If you're reading this review and slightly aghast that anyone wouldn't care about music, then you'll probably love this. 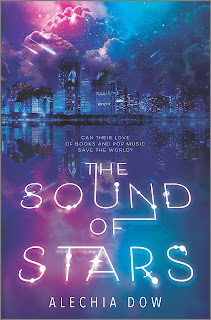