The Mermaid, the Witch, and the Sea by Maggie Tokuda-Hall

A desperate orphan turned pirate and a rebellious imperial daughter find a connection on the high seas in a rich, riveting fantasy set in a world divided by colonialism and threaded with magic.

Aboard the pirate ship Dove, Flora the girl takes on the identity of Florian the man to earn the respect and protection of the crew. For Flora, former starving urchin, the brutal life of a pirate is about survival: don’t trust, don’t stick out, and don’t feel. But on this voyage, as the pirates prepare to sell their unsuspecting passengers into slavery, Flora is drawn to the Lady Evelyn Hasegawa, who is en route to a dreaded arranged marriage with her own casket in tow. Flora doesn’t expect to be taken under Evelyn’s wing, and Evelyn doesn’t expect to find such a deep bond with the pirate Florian.

Soon the unlikely pair set in motion a wild escape that will free a captured mermaid (coveted for her blood, which causes men to have visions and lose memories) and involve the mysterious Pirate Supreme, an opportunistic witch, and the all-encompassing Sea itself. Deftly entwining swashbuckling action and Asian folklore in a land dominated by an imperial class, Maggie Tokuda-Hall’s inventive debut novel conjures a diverse cast of characters seeking mastery over their fates while searching for answers to big questions about identity, equality, and love.

The Mermaid, the Witch, and the Sea conveys the capriciousness and brutality embedded in colonialism and imperialism via a story of self-discovery, terror, and survival.

The characterization is layered and subtle; the author used multiple POV characters to their best advantage, using their different perspectives on the same events to keep the reader in the loop even when not everyone had the full picture. I loved the pacing, both how its broken up across the main sections and how the story is handled within those sections.

This is the kind of book where no one is safe but it's mostly going to be okay in the end. It takes the time needed to get there so that when things get resolved it feels like everyone earned their endings, for better or worse. There's a lot of traumatic backstory but it's revealed a little at a time, giving the reader time to acclimate before more details (or more traumas) are revealed. That's so important here because it's ultimately a book about extricating from bad situations and coming to terms with the past in a way that lets them be whole and wholly themselves. Not everyone chooses to work through things and get better, because it's also about choices and complicity under a colonialist and brutal system writ large as well as the smaller setting on the ship. It doesn't shy away from trauma, because to show any less than it does would be to rob it of impact and importance with regards to its broader themes. A few scenes were definitely written with a particular focus to be shocking, but in a way that sharply focuses the characters and makes the stakes clear. It didn't treat trauma as a plot twist, but it understood that inflicting trauma is a form of escalation. While they might be the most traumatic or shocking to happen by that time in the narrative, they weren't necessarily the worst things that had happened to the characters at that point.

While this is marketed as YA, I would hesitate before recommending it to anyone under 16, and at any age I would definitely recommend reading the CWs first. Having said that, there's a lot of really good catharsis in this book because it is fundamentally a book about processing trauma and being whole even when you've felt broken, and that's such an important thing to show younger readers. 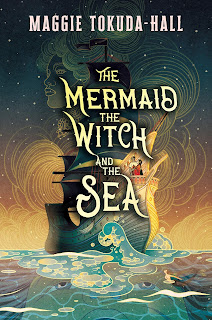