Blazewrath Games is the story of a teenager trying to fulfill her lifelong dream of playing a particular magical sport, now disillusioned when it turns out to have much more sinister origins but she has to play anyway.

I really like the sport centered in this book. It makes sense as something you could really play in human/dragon teams, and it’s suitable epic-feeling to make a major tournament of in a world with magic. I wish we’d gotten more of it, because, unfortunately, this book really didn’t click with me, I could never quite get into the style, but it has a lot of strengths and I want to highlight those for anyone who doesn’t have tastes identical to mine (so... most people).

It has an explanatory style which makes sure to clarify a lot of stuff that could be confusing when left as subtext. Often something will happen, the MC reacts, then they think about what just happened in a way that makes its importance explicit. The backstory of the world is really complicated and so it does help to clarify what's going on, but for me it repeatedly broke my immersion because it reinforced the fact that I'm not in that world and I don't know the backstory. I prefer stories which move on and assume I'll keep up. This explanatory style is clearly a deliberate choice from the author, and it's used consistently throughout the book, so if that's what you like then this is a pretty good version of it.

A lot of the action scenes feel like they’re written for people who don’t care about action scenes (or who don't need any help to picture them on their own). They’re written to convey vaguely what happened, and they do a great job of capturing the emotion behind them, but they only occasionally describe individual moves within the fights. I don't picture things in my head very well, so if I don't get a full description it feels like the scene didn't happen, but people who either don't need to "see" it or who can with just a little prompting will probably do fine. The big action scenes at the very end had more description than the earlier ones, but even there it skipped over a lot of details I would have liked.

I liked the second half a lot better than the first, at least in terms of style, because enough things had been explained by that point for the narration to relax and for the MC to no longer constantly stop to explain every thing to us. For anyone who likes that explanatory style, it’s still there, just every 5-10 pages instead of 1-2. The infodumps never quit though, even at the end there were places where the MC stopped to explain a major story element or over-explain the implications of what someone else just said.

Now for the aspects I didn’t like at all. I constantly felt jerked around as a reader. Because of the way backstory is handled, I’d be told something was important at the same time I learned it even was a factor in something. Occasionally there were “revelations” or epiphanies which were discarded as unimportant by the MC when she’d barely finished hyping how awesome they were. I felt like I was being dragged by someone solving a maze at top speed by running into all the walls until they got out. I never had a chance to figure out something myself, or to experience a slow revelation from clues earlier in the story. I just watched the MC race through the possibilities until the book ended. I don’t need to be led along, I enjoy some mystery, and I don’t normally mind being confused, but it felt like the story couldn’t decide between being clear and being mysterious, and the result was, for me at least, the worst of both worlds. It also manages to be a book about dragons which spends most of the book not having dragons in the major scenes. Even the training montage is largely centered on hand-to-hand fighting and intra-team drama instead of the dragons. That’s not all bad, but it meant that in addition to not feeling great about the story I also didn’t get much of what was, for me, the main draw to the story in the first place. I would feel misled if someone pitched this book to me as any version of “a worldwide competition of a sport with dragons”, because that’s only technically true. The focus is much more on the machinations behind the scenes which are affecting the games.

The ending was fine, it works, there was yet another revelation at the end in a way that explained some confusing things from earlier, but not enough to change my general opinion. If you're interested from what I've said then go for it, you might like it. 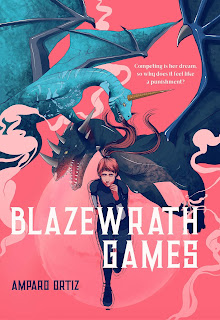