Reverie is a queer fantasy about the futility of escapism, using dreams larger than life to create a space for becoming comfortable in one's own skin after the Reverie is over.

This one took me a bit to get into because I felt out of step with the plot from the outset. The MC also doesn’t know what happened right before the book started, so the reader is discovering the past along with him. The pacing is kind of wonky and disjointed, for the first half of the book I never really felt like I had a handle on what the next event was going to be. That sense of unease, of never quite getting comfortable, is thematically appropriate and helps reinforce the sense that things are confusing and wrong, even outside the Reveries. Towards the end of the book the pacing started feeling better as the MC was starting to understand more of what had happened before and was happening now. We stay very centered on the MC's perspective, including his uncertainty and his frequent mistrust of the people around him because he can't trust his memory and doesn't know why his supposed friends are behaving the way they do.

The constant feeling that things are subtly wrong is explicitly and implicitly driven by the ways that queer people are made to feel uncomfortable for existing, by worries of not being accepted for being gay, by a past of repeatedly being bullied for being read as gay, etc. It deals with the way that homophobia takes a toll over the course of years, rather than in quick and easily recognizable instances like slurs. It’s really well done, perhaps a bit obvious in places but I suspect that’s because I’m also queer and so as soon as there was a hint of it I picked up on the parallels immediately. This would probably work really well for a teenage reader (this is YA, after all), as it lays the groundwork for the comparison and then slowly makes it more and more explicit as the MC becomes more confident and gets a better handle on what’s going on and what he can do to fix things.

It's kind of about queer escapism, but it's more about how escapism doesn't fix things, running (especially metaphorically) doesn't make things better and eventually you have to face them, process them, and find a way forwards. I really love the last quarter of the book, it pulled everything together and the ending is fantastic. The romance is sweet without taking up too much of the story, but queer love and acceptance are bound up in the structure of this book in a way that is not separable from it. This is perfect for when you're ready to feel off-kilter, a little bit uncomfortable but not in a really traumatic way (at least for the reader). 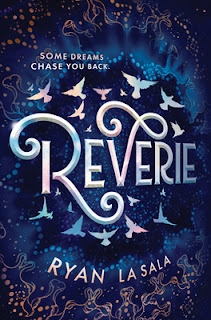