The Tiger Flu by Larissa Lai

In this visionary novel by Larissa Lai--her first in sixteen years--a community of parthenogenic women, sent into exile by the male-dominated Salt Water City, goes to war against disease, technology, and powerful men that threaten them with extinction.

Kirilow is a doctor apprentice whose lover Peristrophe is a "starfish," a woman who can regenerate her own limbs and organs, which she uses to help her clone sisters whose organs are failing. When a denizen from Salt Water City suffering from a mysterious flu comes into their midst, Peristrophe becomes infected and dies, prompting Kirilow to travel to Salt Water City, where the flu is now a pandemic, to find a new starfish who will help save her sisters. There, Kirilow meets Kora, a girl-woman desperate to save her family from the epidemic. Kora has everything Kirilow is looking for, except the will to abandon her own family. But before Kirilow can convince her, both are kidnapped by a group of powerful men to serve as test subjects for a new technology that can cure the mind of the body.

Bold, beautiful, and wildly imaginative, The Tiger Flu is at once a female hero's saga, a cyberpunk thriller, and a convention-breaking cautionary tale--a striking metaphor for our complicated times.

There are two MCs, one of which is trying to do the best thing for her family even though they're basically all dying or dead; going through the motions because even the motions still matter, damn it. The other is in a holding pattern, repulsed by thoughts of the past in a way that denies the reader knowledge of it as well. The combination of their alternating perspectives helped to clarify details which are unique to the setting, since there was often one perspective from which the thing was new and therefore we'd get a bit more of an explanation than from the character for whom that details was commonplace and unremarkable.

I care a lot about how books feel to read, if you follow my reviews you probably already know that. I love the way this book uses words which are just enough like modern words for the meaning to be apparent, but far enough away that it feels like you’re being thrown into a space that’s very far away from current reality. I caught at least some of the references, but I'm sure there's even more that I missed, they're woven into the lexicon of the world in a way that feels familiar without needing to be understood as referential. The language felt visceral in a way where it just felt so good to read, even when what was happening was frequently full of gore and sometimes drenched in death. The book expected me to keep up but also made it generally easy to do so without resorting to infodumping. The world is described through the way the characters interact with it, forming itself by coming into focus as they move through it, this style allowed it to establish a fantastic and detailed setting without every quite pausing to explain. I couldn't tell you what most of the places actually looked like, but I was pulled in by how they felt as spaces in which the MCs exist.

I'd be remiss if I failed to mention that if you like Gideon The Ninth by Tamsyn Muir you'll probably love The Tiger Flu. They're very different stories, but they share a lot of the things that make them both engaging and fantastic in how they're told. I don't know if that recommendation works in the other direction, because in Gideon The Ninth you're really not supposed to get what's going on for a large part of the book and that's not a thing in The Tiger Flu. 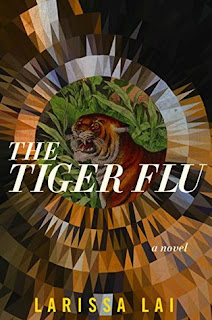