Authors featured: Samira Ahmed, Dhonielle Clayton, Zoraida Córdova and Natalie C. Parker (editors), Tessa Gratton, Heidi Heilig, Julie Murphy, Mark Oshiro, Rebecca Roanhorse, Laura Ruby, Victoria “V. E.” Schwab, and Kayla Whaley.
Vampires Never Get Old is a pretty strong collection of excellent vampire tales. No two mythos were exactly the same and I loved most of the stories.
I liked almost all of the collection, so first let me cover what I really enjoyed. Many of the stories had really powerful depictions of marginalized people finding strength during their interactions with vampires, sometimes by being vampires and sometimes through rejecting them. My particular favorites are "The Boys from Blood River", "In Kind", "Bestiary", and "Mirrors, Windows & Selfies". I love the premise and the feeling of "The Boys from Blood River", the MC handles relaying backstory while being firmly anchored in the moment in a way that immersed me very quickly into the story. The ending was really good, but now I want even more with the MC. "In Kind" gives a voice to a real kind of victim whose killers are frequently excused or even praised for their murder. It handles a difficult topic well through a really superb story. "Bestiary" was a slow burn, gradually trickling in details to make the MC's backstory clear, crystalizing in one fantastic moment when the pieces are finally in place to understand what happened. I never really felt confused leading up to it, but that moment of really understanding felt really good, especially in a tale this short. "Mirrors, Windows & Selfies" is a story about using the internet to feel a little less alone when you can't leave. I wish this had a follow-up I could read, it implies a very interesting variation on a lot of vampire lore and I'm fascinated (plus I really care what happens to the MC).
I cannot in good conscience recommend the final story, "First Kill". Minor spoilers to follow. It contains a gay character saying "People aren't straight... They just don't know better." I wasn't sure what to think about it as a one-off comment from a teenage character, but it erases a lot of people who are straight as well as queer, and it's a bizarre sweeping denial of people's understanding of their own identities. It's completely unchallenged within the narrative. The second thing which changed this from a story I was concerned about to one I cannot recommend is that there's a character who is a monster-hunter, and in the backstory describing the monsters her family has killed, there's reference to a "full-grown wendigo" and a teenage character tries to take a "monstrous claw" as a prize. He's not allowed to because there's a general "no-trophies" rule. Having that appear here just to add background details for a secondary character felt bad to read. The actual plot was interesting, but I can't recommend this collection without giving a warning about this story. Neither moment was examined, and they felt like they were there just to be filler about secondary characters, instead they're just cringey and bad.
Seven Nights for Dying: CW for parental death (backstory).
The Boys from Blood River: CW for homophobia, bullying, violence, parental death, death.
Senior Year Sucks: CW for blood, death.
The Boy and the Bell: CW for transphobia, misgendering, gore, death.
A Guidebook for the Newly Sired Desi Vampire: CW for colonialism, death.
In Kind: CW for ableism, child death, blood, death.
Vampires Never Say Die: CW for sexism, blood, violence.
Bestiary: CW for vomit, death (backstory).
Mirrors, Windows & Selfies: CW for kidnapping, imprisonment, death.
The House of Black Sapphires: No major CWs.
First Kill: CW for death. TW for discussion of body parts as trophies (wendigo). 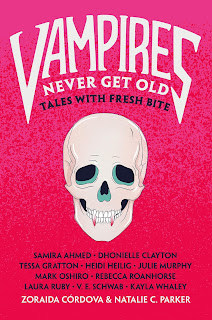