The Awakened Kingdom by N. K. Jemisin (The Inheritance Trilogy, #3.5)

The Awakened Kingdom is a novella set after the end of The Inheritance Trilogy, featuring a tonal shift and a new MC.
This is a sequel novella which is not meant to stand on its own. The story is self-contained but so much of the background was established during the main trilogy that this story doesn't devote much time to showing the setting, except in the ways where things have changed in the centuries since the end of the trilogy. It's a mostly lighthearted story about grief, which feels weird to say. The MC is disconnected from the very sad events of the main trilogy's conclusion, and finds herself in the position of being surrounded by people who expect things from her based on someone she never knew. How she deals with that is interesting and I enjoyed this story. I am glad that this particular narrative tone is only present as a novella because I think it might become irritating in a longer story, but it's just the right amount here to really convey her state of mind (being a literal child but also a godling).
The secondary plot which becomes more obvious in the second half of the story is really intriguing, it continues some of the themes from the main trilogy in a great way. I especially like the continuation of the idea that unchecked power isn't great in anyone's hands, no matter how noble the foundation.
If you like The Inheritance Trilogy and want to know more about what happened after the main story, give this a read. However, if you read this first it might not be a great way to know whether you'll like the main trilogy since the tone is pretty different.
CW for sexual assault, child abuse, self harm, violence, death.
Clear Your Shit Readathon 2020 prompt: Shortest Book
Bookshop Affiliate Buy Link (The Inheritance Trilogy in one volume) 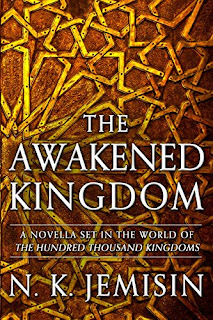