The Toll by Neal Shusterman (Arc of a Scythe, #3)

The Toll is the calm before an even nastier storm, the ringing in the ears after a cosmic shriek. A love letter to the best and worst in future humanity, built on death and drenched in blood.

Book three swims in blood, with a higher body count than ever before but fewer direct descriptions of death and violence. It helps to keep it from feeling like a bloody slog as the antagonist takes their goals of world domination through gleaning (read: culling, massacre, and genocide) as far as they can. It's about figuring out that even a world which was supposed to be perfect... isn't. Because people aren't perfect, and trying to live in someone else's idea of perfection chafes and cuts and breaks people down until they want to scream. This book rides the ripples of a pent up scream which was built into the fabric of its existence, waiting to be heard.

I love the MCs, including the couple of ones who are new in this book. For one character in particular I love their version of a kind of genderqueer identity which exists in the context of this book while being unequivocally queer. To me their identity feels like it fits in this world, including having this book's version of the kind of awkward conversations which happen between nonbinary and/or trans people and well-meaning but clueless cis people, all without using those contemporary words. It captures the feeling of those interactions while making them fit seamlessly within the story. I also love the returning MCs, they have full arcs of their own and everyone gets a resolution which is appropriate to what they want and what's actually possible in this world.

Now for my sequel check, here goes: It wraps up a lot of things left hanging from the previous books, just, so many. There's a storyline, complete with a new character, which isn't present in the previous book (and they're such a great character too!). Several things get introduced and resolved within this book which were not present in the first two (though the circumstances which lead to them might have been set up earlier). As the final entry in the trilogy it wrapped up a bunch of things, major and minor, some of which I'd given up on having a satisfying resolution for (because I thought that the tone of the series meant I'd have to be content with my unhappy and slightly unsatisfying resolution from earlier in the series). This is a pretty perfect end to a fantastic trilogy, and it feels finished. I'm very happy with where the various characters end up, it's a good mix between being messy in a semi-realistic way and being narratively satisfying. The POV characters who are new to this volume feel distinct from previous narrators, including in the interstitial sections. As for whether this could make sense if someone read this book without reading the first two, no, but, really, don't pick up the last book of a trilogy and try to read it by itself, it's not worth it. If this review intrigues you then read the trilogy, the whole thing is great.

I mentioned the series' handling of fatphobia in my first two reviews, and, as far as I can tell, that's not present in this third book, unless I just didn't notice some minor instance. My conclusion as far as the series goes is that the presence of bigotry such as fatphobia in the first and second books were hints that it wasn't a perfect world long before everything else went to shit due to the events in the main story.

This book contains references to the intentional massacre of people who are implied to be Indigenous or of Indigenous descent, as well as various unnamed subcultures. There's also massacre based on affiliation with a religion unique to the series. It's discussed but usually not directly depicted. It's unequivocally a bad thing within the book, but it's there, so please take care of yourselves.

Clear Your Shit Readathon 2020 prompt: Mini Boss Battle #1 - A sequel in a series I need to finish 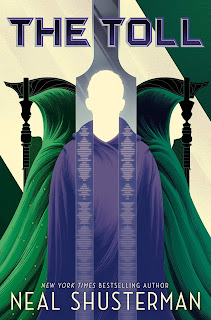