Ship of Smoke and Steel by Django Wexler (The Wells of Sorcery, #1)

I did not finish Ship of Smoke and Steel, I got 110 pages in and had to stop because I had a weird mix between apathy and dread every time I thought about it. This one just never gripped me, I think I had trouble relating to a MC who treats allies as so completely disposable. If they’re not going to care about the secondary characters, why should I? Even this early on there is a hint of possible queer romance that will develop later on in the book, but since the protagonist has already demonstrated that they are completely capable of murdering men they've been in relationships with, being offered a f/f pairing doesn't sit right with me. As a bi person, having a character who seems to be written as bi or pan also be a character willing to murder their partners is really unsettling because it plays into biphobic stereotypes. If the book handles it by making her have been lesbian and not really bi or pan... that would make it worse, not better because it would play off of a different facet of biphobia. I didn't get far enough to know which way it was going to go, but I got far enough to know that I wouldn't be comfortable with either solution. 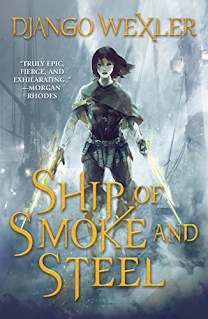