Running out of time, Magic or Die is fun and terrifying in turns. With strong characterization and an instantly hateable bureaucratic villain, this fantasy is no one's daydream, and the demons may fill your nightmares.

I loved reading this, I read it in one sitting and enjoyed every minute of it. Sometimes I was just laughing while reading, I had such a good time. It's also very dark and deals with a lot of stressful topics (refer to the CWs below), but handles them in a way that has so much care for the reader that it was cathartic rather than stressful. The way it handled the characters was superb, really understanding what they'd be going through emotionally in this awful situation, and that made it feel good to read too, even when it was dark. The MC has this grittiness that reminds me of the best bits of a film-noir setting without actually being in that genre, especially at the start. He's stressed and trying to hold it together for the people under his care even when he doesn't actually know a whole lot more than they do, and that was such a relatable feeling.

The balance between focusing on each secondary character and keeping the plot moving was handled well, the more introductory portion of the book was staggered in a way that felt natural and made it easier to track these very different people. I'm someone who usually has trouble tracking a lot of character names at once and I didn't have problem here, at least partly because of the pace at which they were established. The magic system could have felt like a giant infodump, and instead I find myself at the end of book one, feeling like I could actually explain this system to someone. I could at least describe the different types of magic and how the users might be affected.

There is a student/teacher romance, but everyone involved is fully an adult and nothing about this setting was a typical academic environment. This portrayal definitely fits under "power differentials are sexy"; it's not exploitative within the story (and the potential for it to be exploitative or inappropriate is discussed by the parties involved).

The villain was fantastically hateable. Early on I was unsure and I thought the MC just didn't like her because she's an abrasive person, but by halfway through I completely got it and unreservedly hated her too. She has a great balance between having an understandable motivation for being evil and being so thoroughly terrible that understanding her didn't make me hate her any less. 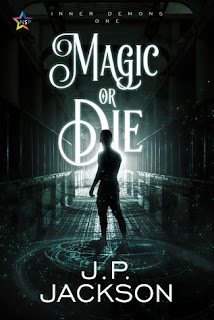