Deadly and absorbing, Scythe is about learning to wield death in a dystopia where everything else is managed by AI but gleaning still happens by hand. The best Scythes don't want the job.

This is a book about the people who deal out death once it can no longer be an accident and so it has a very high body count. People of all ages die (either in the page or implicitly between scenes), including children (sometimes temporarily, but often permanently). Some of the deaths are less detailed but several are very graphic. It's in the CWs but I need to make that very clear up front because if that's going to stress you out, then skip this one, it'll be fine. I love it, but it's possible that it has the highest body count of any non-war book I've read (if it's not the highest, it's close).

I came to this book already knowing I love Shusterman's writing and I was not disappointed here. It's a dystopian future full of characters who have trouble understanding our present but are left dealing with the remnants and rough edges that even the most advanced nanos and AI can't quite remove. The nastiest of these rough edges is the reality that if there are going to be more people and the planet is limited, some of them must die... and that's where the Scythes come in. The best dystopias highlight the strangeness and problems of our real world, and this handles that amazingly. The characters have distinct voices (which is crucial in a story with multiple narrators), and I was genuinely torn over which projected ending I wanted. What I received was immensely satisfying and should leave book two in a great position to continue the trilogy. The secondary characters who are Scythes have a nice balance between gravitas and humanity, and the normal humans sometimes get a chance to shine as well.

There's fatphobia baked into the book in a peculiar way, I think it's a critique of modern attitudes on weight, but it's in a grey zone that might make someone uncomfortable. Most people are a "desirable" weight due to nanos (part of fixing every problem except death), but there's a significant secondary character who chose to control their weight to be heavier on purpose and they get some fatphobic responses to it. I like how it's handled, and I'm glad that in a world where weight can be guided by pressing a dial it's explicit in the story that some people would still choose to have a body like mine, but the implied fatphobia of a world of artificially thin people might be stressful to some readers. I'll be looking to see how this is handled in the next two books, but how it's started is very good.

When trying to make sure that the audience knows how the new/futuristic setting is, but without having the characters awkwardly explain their reality, a great way is to subtly indicate which things they take for granted. This book had several great moments of that kind and they were spaced out in the book so that they built immersion in the story rather than taking me out of it. I'm looking forward to the rest of the trilogy, hopefully it'll take this fascinating premise to amazing places. 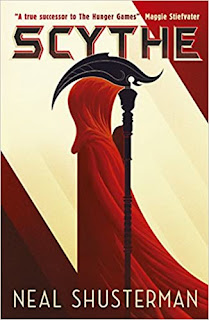