Not Your Sidekick is a fun and light-hearted dystopian superhero story which stays fairly upbeat even in a world that feels insidious and dips into horrific when viewed from the outside.

It slowly trickles in bits of information that paint the picture of how warped and controlling the world is. The MC doesn't know to question it (of course, at first how would she?), but the little drips of stuff that's off-kilter and probably toxic comes in slowly. The story stays in a very light tone even though some darker stuff is implied to be going on. Her journey to figure out what's happening and decide what she wants to do about it was really cool, and I'd definitely recommend this to readers in the middle-range of YA (14-15 probably as the sweet spot).

There's a couple of conversational moments that felt like they were designed to let someone know why pronouns are important. I'm really hyped that a book for teens has this in here because it's really important. As an adult reader who already knows about pronoun etiquette it just took me out of the moment a bit, but I know if I'd gotten to read this as a teen it might have been a step in figuring out some stuff a little sooner.

The action is great, the characters are endearing and awkward in their own ways and I loved reading this book. I'm very excited to check out the sequels, this laid a lot of groundwork in terms of worldbuilding and I'm interested to see how the author develops it further. The biggest points of anxiety for me as a reader all revolved around a certain character being chronically unable to pick up a hint when it was handed DIRECTLY to her, but it was really relatable (hence the anxiety). 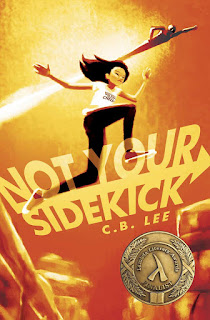