The Midnight Bargain by C.L. Polk

Beatrice Clayborn is a sorceress who practices magic in secret, terrified of the day she will be locked into a marital collar that will cut off her powers to protect her unborn children. She dreams of becoming a full-fledged Magus and pursuing magic as her calling as men do, but her family has staked everything to equip her for Bargaining Season, when young men and women of means descend upon the city to negotiate the best marriages. The Clayborns are in severe debt, and only she can save them, by securing an advantageous match before their creditors come calling.

In a stroke of luck, Beatrice finds a grimoire that contains the key to becoming a Magus, but before she can purchase it, a rival sorceress swindles the book right out of her hands. Beatrice summons a spirit to help her get it back, but her new ally exacts a price: Beatrice's first kiss . . . with her adversary's brother, the handsome, compassionate, and fabulously wealthy Ianthe Lavan.

The more Beatrice is entangled with the Lavan siblings, the harder her decision becomes: If she casts the spell to become a Magus, she will devastate her family and lose the only man to ever see her for who she is; but if she marries--even for love--she will sacrifice her magic, her identity, and her dreams. But how can she choose just one, knowing she will forever regret the path not taken?

The Midnight Bargain is devastating and witty, full of carefully considered deals, social wrangling, friendship, sorcery, and romance. It's also acquainted with dread, with impending doom of a deeply personal kind, knowing that loved ones are shadows of all they could be.

I really like the dynamic between the MC and the non-POV major characters. She has different relationships with each of them, and in a book which is driver by conversation and socialization, that's really important. I love witty banter, tense interpersonal relationships, navigating social politics for material (and marital) stakes, it's done so well here. There's an absolutely devastating scene which revolves around flower arrangements... I'm in awe. This was a really fun book to read, I loved having strong characters with clashing motivations and often incompatible goals, all trying to get what they want, sometimes assisting and sometimes impeding each other. It's a kind of thrilling story which is gripping despite not having a ton of action (but not quite none).

This book does for discussions of sexism in a magical aristocratic setting what the The Kingston Cycle does for classism in the same. The sexism isn't anything really unusual, it just has a very specific and horrific shape that makes sense to have come out of this particular fictional world. The worldbuilding is great, and the characters (even the somewhat loathsome ones) have room to grow from where they were when the story began. I especially liked the dynamic between the MC and her younger sister, the way she thinks of her changes throughout the story in a way that (speaking as someone with both older and younger siblings) felt natural and made sense based on their relationship at the start of the story. Thinking back on it, that's definitely something that was done really well here, characters grow within the story and their relationships with each other change either as a driver of that growth or in reaction to it, depending on the character.

I like this one a lot. I feel content with it as a stand-alone novel, I think any potential sequel would need to follow different protagonists. The ending was really satisfying and I feel good about how everything wrapped up. 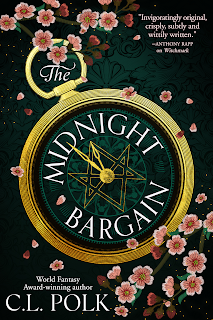