Harrow The Ninth by Tamsyn Muir (The Locked Tomb, #2)

Harrow The Ninth is deeply necromantic and gorgeous; full of the most beautiful body horror with a casual familiarity with death, the dead, and those who refuse to die. For everyone who read GTN and wants to be more confused, for longer, with even more viscera.

First and foremost: If you made it to the end of Gideon The Ninth, and you liked it, you’ll like Harrow The Ninth. If you haven’t read Gideon The Ninth, go do that (or at least read our review) and then come back, this will be here when you return. If you have a phobia of skeletons, viscera, blood, gore, or the frequent removal and rebuilding of bodies... don't read it, it's really okay if this one isn't for you (but I hope for your sake it is, because it's fantastic). It would be deeply disturbing to anyone who has an abiding and genuine fear of such things, so please use your discretion.

Now that you’re here: Harrow The Ninth is perfect for anyone who read Gideon The Ninth and said to themselves, "I would like to spend longer not knowing what's happening but having a great time." Every phrase I want to use to describe this book reminds me of how people who have done drugs talk about how they feel. I was disconcerted frequently, confused generally, and loving every minute of it even though I didn't know what was going on (and clearly wasn't supposed to). It felt good to read, the prose had a visceral quality (both in terms of the syllabic density and its propensity to describe actual viscera). About halfway through I had a guess at what might be going on (and I was only partially right), it wasn't until 70%-80% of the way through that I reached the explanation and truly understood. But that turning point where I finally got what was happening, wow, I think it was an even greater emotional payoff for me than when I finally understood what was happening in Gideon.

As for my usual book two check for series of at least three books (as this is a trilogy): This wraps up several things from the previous book (but you don't really understand how until very far in). There is an entire storyline which only is within this book, in one way, but also transcends it and encompasses the first book in even more bizarre ways, so... I don't know whether this qualifies as having a storyline unique to this book, I really don't know. I think there is a major thing which is introduced and resolved wholly within this book, but with how trippy these books are it's totally possible that I'll re-read Gideon and realize it was actually begun there. This definitely leaves some major things to be addressed in the third book, which is good. The POV character did change, and the voice is very distinct from the previous narrator, oh yes. Lastly, this is a bizarre case where the first 60% of the book might actually be less confusing if the reader had not read the first book. I don't recommend picking up this one as your starting point, since the conclusion will make absolutely no sense without having read Harrow, but since this is a trilogy and not a long-running series this criterion isn't super important. TLDR: This book defies my usual book two checks and that feels appropriate. It's a great continuation while also having plenty to hold its own, and the narrator feels distinct from the first book's narrator. This makes me need the sequel as soon as I can get it. 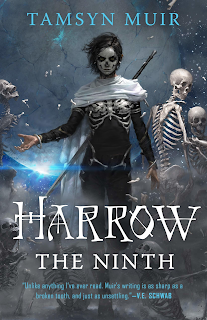