The House in the Cerulean Sea by T.J. Klune

Linus Baker leads a quiet, solitary life. At forty, he lives in a tiny house with a devious cat and his old records. As a Case Worker at the Department in Charge Of Magical Youth, he spends his days overseeing the well-being of children in government-sanctioned orphanages.

When Linus is unexpectedly summoned by Extremely Upper Management he's given a curious and highly classified assignment: travel to Marsyas Island Orphanage, where six dangerous children reside: a gnome, a sprite, a wyvern, an unidentifiable green blob, a were-Pomeranian, and the Antichrist. Linus must set aside his fears and determine whether or not they're likely to bring about the end of days.

But the children aren't the only secret the island keeps. Their caretaker is the charming and enigmatic Arthur Parnassus, who will do anything to keep his wards safe. As Arthur and Linus grow closer, long-held secrets are exposed, and Linus must make a choice: destroy a home or watch the world burn.

An enchanting story, masterfully told, The House in the Cerulean Sea is about the profound experience of discovering an unlikely family in an unexpected place--and realizing that family is yours.

I originally highly recommended this but now I actively recommend against it upon learning that this was based (or at least partially inspired by) on the Sixties Scoop, an decades-spanning event in which thousands of Indigenous children in Canada were forcibly removed from their homes and adopted elsewhere. That real-world context makes the "these orphans have powers" marginalization plot into a fantasy version of a real-world genocide. I'd waffled on whether to even bring up implications about race in the original review since the book seemed like it was trying to be about queerness rather than ethnicity, but it's horrible that it is actually about a major series of events in a racially/ethnically motivated genocide that hasn't really stopped in the present day. It also perpetuates a long-standing and racist tradition of depicting Indigenous people as magical or otherworldly, in this case many of the kids are literally inhuman.

For someone else's review with more details, please check out this link. My original review is left intact below.

The House in the Cerulean Sea is lovely and perfect and amazing; a fantastic found-family story about how things can be okay even when people are terrible and awful people don’t like the idea of marginalized people being happy.

The marginalization in question is specifically that of being a magical creature of some kind. It's set at an orphanage and deals with the evils and prejudices in the kind of system which creates orphanages for magical children but never tries to get them adopted, which may be triggering for some readers. The traumas are mostly handled as backstory, and most of them aren't fully described but rather hinted at, but there are depictions of characters being triggered by events in the present. This book has so much care and was really cathartic to read.

Woven throughout the story is an awareness of other kinds of marginalization and identities which are discriminated against, in a way that subtly nudges to say that these particular kids have lost their homes for turning into a small dog or being the literal son of Satan, but the way that this happens and the hate that their existence engenders due to bigotry and ignorance is coded as an analogue for queerphobia, specifically. It depicts internalized fatphobia/body shaming, as well as homophobic micoraggressions (the kind which pretend to be nice but still hurt). It definitely was focused on magical characters as an analogue for queer people, while also having explicit queerness in the story in a really great way.

The characters are excellent, I love everyone on the island and I'm so happy without how this book handles their stories and gives them space to be happy even though things aren't perfect. The setting is lovely, the contrast between the island and the city is cartoonishly stark because it conveys how it feels to the MC to be in each of those places. The people at the agency are well-written and terribly bureaucratic, the secondary characters at each location fit their spaces well while also informing the setting.

It's about learning how to relax, to enjoy things and have fun, to be okay and be yourself, but without pretending that bad things don't happen. 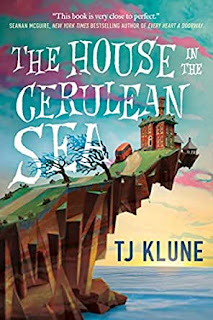