Discount Armageddon is an exciting and pretty bloody way to kick off a series, and I love it. With a few twists I guessed and one that I definitely did not see coming, this fun and fast-paced story that has me excited to keep reading this series.

The cryptids described and/or referenced in the book are from a variety of cultures and appear to be interpretations which came out of a lot of research and care, though I’m unable to vouch specifically for any of the portrayals. The overall effect is to make it clear from the start of the series that cryptids are a worldwide phenomenon, with cryptids from cultures all over the world (no default-European nonsense here). There’s a pretty important secondary character whose journey involves learning to be less racist against cryptids, and occasionally he dips into microaggressions founded in real-world racism. It’s minor, and it’s called out by the other characters, but it is there.

Overall I really enjoyed this one. Having read some of the author's later (and better) writing spoils me a bit for this one because I know it gets so much better later, but I really like this book and it's a great start to a series that I've heard so many good things about. I love creature-features and that's the focus of this whole book so I was very happy reading it. 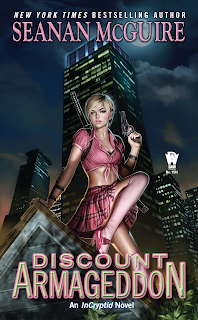