Anya and the Dragon by Sofiya Pasternack (Anya, #1)

Anya and the Dragon is the story of fantasy and mayhem in tenth century Eastern Europe, where headstrong eleven-year-old Anya is a daughter of the only Jewish family in her village. When her family’s livelihood is threatened by a bigoted magistrate, Anya is lured in by a friendly family of fools, who promise her money in exchange for helping them capture the last dragon in Kievan Rus. This seems easy enough, until she finds out that the scary old dragon isn’t as old—or as scary—as everyone thought. Now Anya is faced with a choice: save the dragon, or save her family.

Anya and the Dragon is an upbeat fantasy story about friendship, magic, and figuring out how to do the right thing when everyone around you has a different idea of what that is.

I like almost all of this book but my one reservation is pretty major because it's a problematic moment which is unchallenged within the story. First, the things this did well. The MC feels like a kid, especially in the way that kids can feel like they're grown up even when they aren't. She's aware of the prejudices affecting her family, but her solutions to try and make things better really fit her age and character. The characters were great, and I loved the balance between explaining all the different creatures and leaving some less-described (but occasionally shown). It helped reinforce how the MC would be familiar with them and wouldn't randomly extemporize about them.

The plot was great, the twists hit just the right zone between being appropriately foreshadowed and genuinely surprising. I loved the characters and found the villains to be appropriately scary in a very believable way. There were a few places where we learn what the MC knows about something and then find out her knowledge is incomplete or inaccurate, it created the feeling that she's still learning about the world (because she's literally a child) and the reader gets to be part of those moments.

The dynamic between the main kids handled really well, they aren't instantly friends but once they get more comfortable with each other they really have each other's backs. They have a specific reason to be around each other at the start, but it feels like it changes into a genuine friendship by the end of the book, and it was really fun to read.

All right. Now the problem. A character is queer-coded solely through a moment of unchallenged queerphobia . He's ashamed of the magic he has because it's the same as his mom, and he's desperate to have the magic his brothers and father do. We both (1) don't get confirmation of him having a queer identity and (2) learn that his brothers tease him for having a feminine kind of magic and not having what they all do, in what looks like both internalized queerphobia from him and regular queerphobia from his family. The parents don't seem to do anything about the teasing, and while he eventually starts accepting the magic he does have, it still felt off. When compared with how a different kind of bigotry (antisemitism) is handled, it especially stands out as either poorly executed or completely unintentional (which I think would be worse). There are several discussions about the way that antisemitism from the villagers affects the MC and her family, including the actions of one particularly anti-Semitic person in power. That antagonist gets a comeuppance directly as a result of his anti-Semitic actions in a moment that feels triumphant in the story. By contrast, the character teased in a queerphobic manner just... starts using his "feminine" magic at one point. There isn't really a resolution to the queerphobia, just to the way it was holding him back. This means that the implied queerness doesn't resolve in a satisfying way, I don't get to be excited about a queer character but I still had to deal with queerphobia, which is the worst of both worlds.

I loved the ending and I am interested in reading the sequel, I do care about knowing what these characters do next. 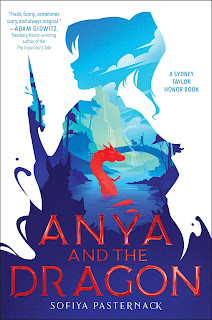