Thunderhead cuts a bloody swathe through your favorite characters while artfully pondering biases and death in a post-mortality dystopian society which still needs people to die. Sure to render your heart deadish.

Just like the first one, this book has a very high body count and no character is safe. I'm not saying your favorite character will die, but be prepared. The antagonist is great in a truly terrible way, I'm impressed by his depravity but also at how the author shields the reader so that we get the MC's reaction to the villain's awfulness, but we're insulated from some of how terrible it is. It's always very clear what happened, and that's it's awful, but because the MCs don't have the same language we do surrounding trauma and death there are in-universe euphemisms and language gaps which make it possible to read and enjoy what could (in the hands of a less caring author) feel like wading through blood to get to the plot. I was genuinely shocked by one of the plot twists, variously stressed out, and I hope the villain gets a comeuppance in the last book of the trilogy because goddamn I hate him, but I loved this book. It's grim and fantastic, pondering moral quandaries and the nature of existence via the quotes beginning each chapter, while also pairing that rumination with action in really great ways.

Now I'll get to my usual book two check. It does wrap up a character arc left hanging from the first book. Oh boy does it wrap it up, ummmm, yeah, not saying any more about that. I didn't cry, it's fine, I repeat that the villain is hateable and terrible. There is a really cool storyline which starts in this book and wasn't present in the first one. I love the MC at the heart of it, and I'm very excited to see what happens with him in the third book. I think it's accurate to say something major was introduced and resolved within this volume, several things, actually. There might be more to discuss with them in the third book, but if we don't come back to them I'm content with their resolutions. There are so many things to be addressed in the third book, it's a trilogy so I feel pretty good about the balance of resolution and open-endedness in this middle book. It kept some of the POV characters from the first book as well as adding a couple of new ones, their voices are pretty distinct from the recurring narrators (each of whom are very different from each other). It was never confusing when the narrator changed for me, their settings, tone, and motivations are separate enough that it was easy to keep track. And finally, I don't think this would make much sense if you tried to start with this one. It's a futuristic setting with a lot of specific language which was naturally explained in the first book, and trying to start here without that grounding would probably be very frustrating. However, if you vaguely remembered those terms but just didn't remember what happened in the first book (maybe if it had been a while between reading them) you'd probably be fine, the connections with the first book are subtly referenced enough to keep that continuity without feeling like they're rehashing anything.

I mentioned fatphobia in the first book, so I'm circling back in the second one to examine how it's addressed here. I think the portrayal of fatphobia is intended as one of the subtle (and occasionally not so subtle) ways to show that the society isn't, in fact, perfect. It's coupled here with some petty politics and a little bit of verbal bullying. I think it works, it's pretty mild but it gets the point across.

I love the narrator for the quotes at the beginning of each chapter, getting their perspective was great and it added to the story and the world-building in a different way that the quotes from the first book did. 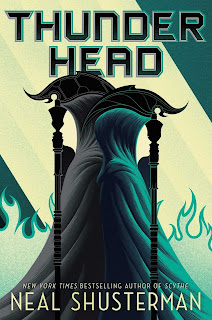