Welcome to the Books That Burn Fortnightly Roundup! Releasing every two weeks (one week early for Patrons). Remember to head to Transcripts That Burn for all available transcripts of the podcast. This month there's a newly-released transcript for OATH OF GOLD by Elizabeth Moon, that means transcripts for episodes covering all three books in The Deed of Paksenarrion trilogy are now available.

We've decided to move to a twice-monthly release schedule for our regular episodes, with Patrons receiving up to one bonus episodes per month depending on their reward tier (Patrons will receive more details in a post before the end of the month). Thank you for bearing with us while we work this out, we love making the podcast and want to have a release schedule that fits with our changing lives.

I'm adding more structure to the review schedule, trying to focus on finishing series I start, and to post the reviews for books in a series closer together so they for a continuous thread rather than being adrift amidst dozens of other posts. To that end, Sundays and Fridays will be reserved for reviews of entire series (one book at a time) of various authors (with an occasional stand alone book if I haven't yet identified a completed series for that date). For the next few months that means on Sundays I'm reviewing books by Ilona Andrews until I run out, and on Fridays I'm reviewing short series by various authors. I've made a tag for books I'm planning to review in this manner (linked here), please feel free to peruse the list and suggest what I should prioritize.

I tried reading one of Julie Kagawa's older series, starting with THE IRON KING. After making it most of the way through the book I realized I wasn't enjoying it because it's a YA book where someone is learning about the world of the fae for the first time and I just don't like that kind of book anymore. I don't know if I'm outgrowing YA generally or this trope in particular, but I think I would have liked this book if I'd found it when I was a teen.

Shortly after I tried LAVA RED FEATHER BLUE by Molly Ringle and didn't like the way it blends technology and fae magic but still feels the need to explain how a laptop works. I didn't like it for similar reasons as why I didn't like THE WITCH KING by H.E. Edgmon, so if you liked one you might like the other as they have stylistic overlap.

I didn't like the surreal style of GINGERBREAD by Helen Oyeyemi, and didn't get very far before stopping.

I finally accepted that I won't like everything published under the Mira Grant pen name for Seanan McGuire, and I officially did not finish Symbiont. It has a lot of tropes overlapping with the Feed series, and I love that one so much that this other story feels both too close and not similar enough in a way I'm not sure how to explain.

If I diverted my attention to read something that doesn't get a review then it's left my memory under the sheer weight of how many Kate Daniels books I read.

Reviews forthcoming for A DESOLATION CALLED PEACE by Arkady Martine, WHERE YOU LINGER by Bonnie Jo Stufflebeam, and GUNMETAL MAGIC by Ilona Andrews.

ONLY A MONSTER by Vanessa Len, book 1 of Monsters is Fantasy, with queer character(s), marketed as Young Adult. Joan is a monster, capable of stealing time from humans to fuel her own time travel. When a hero kills her family, she tries to undo it. Told in Third Person with Single POV.

SOUL OF THE SWORD by Julie Kagawa, book 2 of Shadow of the Fox is Fantasy, with queer character(s), marketed as Young Adult. Yumeko and her companions travel to bring the scroll to the Steel Feather Temple, pursued all the while. Told in Third Person with Ensemble POVs.

MAGIC BLEEDS by Ilona Andrews, book 4 of Kate Daniels is Urban Fantasy, with queer character(s), marketed as Adult. Kate gets called to stop a guy in a cloak who keeps magically killing tough guys in rough places and causing panic. Told in First Person with Single POV.

THE STORYTELLER'S DAUGHTER by Cameron Dokey is Fantasy marketed as Young Adult. Shahrazad is the Storyteller's daughter, and steps up to wed the king after he pledges to kill a new bride each month after one night. Told in First Person with an Omniscient Narrator.

NIGHT OF THE DRAGON by Julie Kagawa, book 3 of Shadow of the Fox is Fantasy, with queer character(s), marketed as Young Adult. Yumeko and her companions pull closer together even as they try to stop anyone from making the Dragon's Wish. Told in Third Person with Ensemble POVs.

MAGIC SLAYS by Ilona Andrews, book 5 of Kate Daniels is Urban Fantasy, with queer character(s), marketed as Adult. Kate has a newly opened office and no clients, that is, until the Red Guard come to her about one of their jobs gone wrong. This time the stakes are all of Atlanta. Told in First Person with Single POV.

I finished my re-read of INTO THE DROWNING DEEP. Technically the final couple of pages don't happen until September 15th, but it was just a couple of pages and I wasn't going to be able to keep it out from the library to hit that date precisely. More than half of the book takes place over two days, and I managed to read that portion in three.

For 2022 I'm hosting a reading challenge that lasts the whole year. September's prompt is to read something by an author who is bi or pan. Our patrons voted for THE ART OF SAVING THE WORLD by Corinne Duyvis.

In an attempt to read more of Julie Kagawa's work and hope I find more I enjoy, I started reading TALON. I like the start of it and will hopefully review the whole series (but we'll see).

THE GHOST BRIDE by Yangsze Choo is a historical fantasy novel which takes the practice of ghost brides to a logical and very spooky extent. I'm halfway through and enjoying it immensely.

I started FOREST OF A THOUSAND LANTERNS by Julie C. Dao and didn't get very far before pausing, I'm not sure yet whether that's because of the story or because I had a stressful week.

In order to read more of Patricia Briggs's work I started reading the anthology ON THE PROWL, but I got stalled on one of the other author's stories. I do intend to finish reading the collection.

I need to finish MAGIC BINDS by Ilona Andrews, I'd paused in order to read a story which took place right before it, so now I'm ready to resume reading.

This time last year I read UNWIND by Neal Shusterman. It's the start of a quartet which I need to go back and finish. 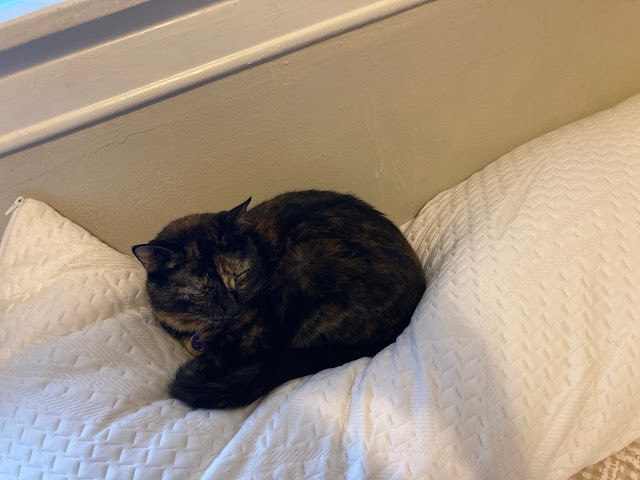