Our shift to bi-monthly episodes is complete! You'll get two podcast episodes per month going forward. The plan is loosely that Patrons will receive episodes on the first and third Mondays, with the public release of those same episodes on the second and fourth Mondays.

The pivot to focusing on reviews of completed series is going well! I've made a tag for books I'm planning to review in this manner (linked here), please feel free to peruse the list and suggest what I should prioritize. Some stand-alone books will be filler between reviews of series, but Sunday and Friday should be series where either I review the whole thing or I review until something happens and I DNF the series for good.

I finally accepted that THE DRAGON REPUBLIC by R.F. Kuang wasn't working for me. Part of what I loved about THE POPPY WAR was the process of Rin going through training and learning how to fight, but the pacing of THE DRAGON REPUBLIC (while thematically consistent with the first book) doesn't have the particular things I was enjoying before. After trying to read it for more than six months, I finally stopped.

I tried reading A MASTER OF DJINN by P. Djèlí Clark, but apparently it's not the first story in its world and I was having trouble figuring out what was happening. I also am not interested enough to track down the earlier stories.

My quest to read more of Julie Kagawa's early work has stalled once again. I tried TALON, but I didn't finish it because I was hoping for more dragons and less angsty love triangle.

I read "The Levee Was Dry", which is another of Seanan McGuire's short stories which are available to her Patrons. I'd downloaded this one a while ago and finally got around to it.

To accompany my read-through of the Kate Daniels books I tracked down the Curran POV collection and read the first nine Curran stories. They're pivotal moments in the main series but from Curran's perspective instead of Kate's, and most of them are very short.

A DESOLATION CALLED PEACE by Arkady Martine, book 2 of Teixcalaan is Sci-Fi, with queer character(s), marketed as Adult. Mahit is once again working with Three Seagrass to avoid war, this time with the aliens at the edge of the empire. Told in Third Person with Ensemble POVs. I love this series, I love this book. If you liked the first one you'll probably love the sequel. It focuses on communication, personhood, and the ways our understanding of others' personhood affects how they're treated... in space.

WHERE YOU LINGER by Bonnie Jo Stufflebeam is Sci-Fi, with queer character(s), marketed as Adult. Various characters deal with grief, lost, and what's left behind when it's impossible to let go. Told in an Anthology with multiple POV styles. I read this as an ARC but didn't manage to get the review out before its summer release.

GUNMETAL MAGIC by Ilona Andrews, book 5.5 of Kate Daniels is Urban Fantasy, with queer character(s), marketed as Adult. Andrea is determined to not let her lapsed relationship with Raphael get in the way of her murder investigation, but things don't quite go as planned. Told in First Person with Single POV. This fits in the middle of the main series, focusing on Kate's best friend, Andrea.

HEXED by Multiple Authors is Fantasy marketed as Adult. Various characters have to deal with some kind of hex or curse upon them. Each story is part of an ongoing series. Told in an Anthology with multiple POV styles. I read this because one of the stories is in the Kate Daniels series.

THE GHOST BRIDE by Yangsze Choo is Fantasy/Historical marketed as Adult. Li Lan lives in colonial Malaysia and learns that a wealthy family wants her as the "ghost bride" for their recently deceased son. Things get strange and she learns more about the Lim family than she ever wanted to know. Told in First Person with Single POV. A lot of it is set in the ghost realm, very cool story.

MAGIC RISES by Ilona Andrews, book 6 of Kate Daniels is Urban Fantasy, with queer character(s), marketed as Adult. Kate and Curran have a chance to get enough panacea to keep kids from going loup for a year, but they'll be far from home and it's definitely a trap. Told in First Person with Single POV. Back to the main series! This features a pretty interesting character who we briefly met a couple of books ago.

I re-read RADIANCE by Catherynne M. Valente, a strange book about grief and movies in space.

For 2022 I'm hosting a reading challenge that lasts the whole year. September's prompt is to read something by an author who is bi or pan. Our patrons voted for THE ART OF SAVING THE WORLD by Corinne Duyvis.

FOREST OF A THOUSAND LANTERNS by Julie C. Dao is going a little bit better, I'm chipping away at it. But, also, I feel like I'm chipping away trying to finish it, so that doesn't bode well for whether I'll DNF it soon.

I'm still stalled midway through the anthology ON THE PROWL, I'll read the final two stories at some point (hopefully soon). I also started IRON KISSED by Patricia Briggs, but got stalled early on.

I just started reading an ARC of VAMPIRE WEEKEND by Mike Chen, I love it so far and hopefully that stays true!

SASSINAK by Anne McCaffrey and Elizabeth Moon is the first book of the Planet Pirates series, I'm halfway through that right now.

I've been reading the series An Ember in the Ashes by Sabaa Tahir very quickly and am currently on the third book, A REAPER AT THE GATES.

My re-read of PORTRAIT OF A THIEF by Grace D. Li is going well. I originally read it as an ARC, and so far I'm not noticing any huge changes from what I remember.

This time last year I read GUARDS! GUARDS by Terry Pratchett, part of the Discworld series.

As for the podcast, hopefully you're enjoying our most recent episode, LEGENDBORN by Tracy Deonn, as well as the first half of our interview with author Seanan McGuire (AKA Mira Grant, A. Deborah Baker), released in January. If you'd like to receive the second (spoiler-filled) half of the interview, please consider supporting us on Patreon. Patrons receive this newsletter one week early, as well as a list of upcoming podcast episodes for the next three months. 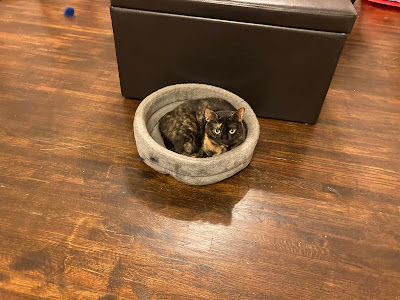