Kate Daniels works for the Order of the Knights of Merciful Aid, officially as a liaison with the mercenary guild. Unofficially, she cleans up the paranormal problems no one else wants to handle--especially if they involve Atlanta's shapeshifting community.

When she's called in to investigate a fight at the Steel Horse, a bar midway between the territories of the shapeshifters and the necromancers, Kate quickly discovers there's a new player in town. One who's been around for thousands of years--and rode to war at the side of Kate's father.

This foe may be too much even for Kate and Curran, the Lord of the Beasts, to handle. Because this time, Kate will be taking on family...

MAGIC BLEEDS finds Kate furious at Curran and trying to keep doing her job with almost no support from the Order as a guy in a cloak skewers the toughest guys in town and panics crowds.

The worldbuilding focuses on character work and backstory, with a bit of deep lore tossed in. Something that has been a welcome but minor note until this point in the series has been the casual mentions of the existence of gay (male) characters generally, with the boudas (were-hyenas) as a queerer zone than the rest due to the influence of hyena their beast forms onto the rest of their society. This book sees a longer and more explicit discussion of queerness (specifically gay men, again) which makes it clear that while it might be unusual in the Pack it doesn't seem to carry a stigma in the new generation. Even Saiman, described as a sexual deviant throughout the series, is labeled such because of the way he approaches sex as a conquest and an experiment, not because he changes forms like outfits to accomplish it.

This isn’t a series that tends to wrap up anything definitively. Things progress, but at this point in the series anything that’s unrelated to the main crisis (and even some things which are) will have follow-ups in later books. It alleviates the pressure on any one plot thread, because there’s room for more later, and enough of a status check to keep things in play. The new storyline is a series of magically-enhanced attacks on locations filled with fighters. The cause of the attacks serves to advance a main storyline in a new way, and the attacks themselves are introduced and resolved within this book. Some major things are left for later, and I like the new status quo which is established by the ending. Kate is still the narrator, and while her narrative voice is consistent with the previous book she’s also changing as a character (gaining friendships and people to protect will do that). This wouldn’t make much sense if someone started here without reading the previous books. The cold open in particular is a response to the end of the last book, and even though I’ve read the previous books and this one several times before, it’s still emotionally jarring in a way that would be either off-putting or confusing to someone using this as their entry point into the series.

This has one of my favorite main plots and least favorite opening in the series. The magically-enhanced plagues, the person behind them, and Kate’s moment of decision with the Order are excellent. There's a discussion of the merits of incremental change within a flawed system versus leaving to make something new that isn't broken for everyone involved. I dislike the opening, though I must begrudgingly acknowledge that this mix of misunderstanding and stubbornness which characterizes the interpersonal conflict that suffuses the first half of the book is entirely in keeping with Kate and Curran's personalities. I dislike it so much as a terrible way for the characters to behave that I have trouble assessing how well it does or doesn't work in the narrative. The way things resolve is appropriate and dramatic, and I appreciate the way that Kate's conduct shows how much she's grown as a person thus far in the series.

There's an excellent sequence with Saiman, Kate, and Curran which goes rather terribly for Saiman but which displays his glass cannon of a personality. He's good at a list of very specific things, and when he meets something his money cannot obtain for him he becomes willing to break everything to prove that he can have it (or if he can't then no one will). There were hints of it in previous books, but it comes to a head here in a pretty spectacular manner. 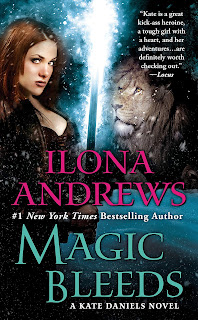