Kate Daniels may have quit the Order of Knights of Merciful Aid, but she's still knee-deep in paranormal problems. Or she would be if she could get someone to hire her. Starting her own business has been more challenging than she thought it would be--now that the Order is disparaging her good name. Plus, many potential clients are afraid of getting on the bad side of the Beast Lord, who just happens to be Kate's mate.

So when Atlanta's premier Master of the Dead calls to ask for help with a vampire on the loose, Kate leaps at the chance of some paying work. But it turns out that this is not an isolated incident, and Kate needs to get to the bottom of it--fast, or the city and everyone dear to her may pay the ultimate price...

Cutting Edge Investigations gets their first client, and a mission to fix what the Red Guard couldn't handle.

Kate and Curran have put (and continue to put) a lot of work into their relationship, and it shows. There's a scene involving another character's failed attempt at seduction which forms a counterpoint to their dynamic, as well as showing what it looked like early on for minor characters who weren't witnesses to the actual events. Andrea and Raphael are on the outs at the moment because of events in MAGIC BLEEDS, some of which feels positioned for the spinoff book, GUNMETAL MAGIC, which stars Andrea and takes place immediately after MAGIC SLAYS.

This series excels at describing the post-Shift world as it is now, with details to anchor the reader while keeping the perspective fully that of a character who didn't experience the pre-Shift world. Kate knows about how things used to be in many cases because her every waking moment is surrounded by the detritus of the world which was, and when the tech is up she gets of glimpse of was (depending on income level) a world of modern convenience which many could enjoy. She has to pay bills, worry about city regulations on occasion, and decide what level of gore on her clothes necessitates getting cleaned up right now versus what can wait. There's a description towards the end where Kate explains the current state of what used to be the Atlanta airport. The whole description conveys how important it used to be, and how utterly the Shift destroyed it. Her tone is, if anything, similar to how she'd tell some currently relevant but ultimately unimportant piece of her backstory.

The shapeshifters are ableist, specifically but not exclusively around physical strength and prowess. It's embedded in their society in ways, small and large, which have been obvious from the very first book in the series. This has in-universe explanations related to the Keep being relatively recent and shapeshifters tending to live in small family groups with some degree of isolation from other society. Playing off of events at the end of MAGIC BLEEDS, MAGIC SLAYS calls this out and makes it explicit that at least some of the ableism was intended as part of the worldbuilding. Curran has some choice words regarding the string of challenges Kate had to fight while he was incapacitated in the previous book, and it's affected the way he approaches leading the Pack.

This series rarely closes off anything definitively, but this finally resolves the tension between Julie's desire to not be at boarding school and Kate's desire to keep her safe. There's a new storyline  with the main problem for this book (Kate's first client at her new building) getting both introduced and resolved. It continues several things from the last book, including but not limited to Kate's new office, Andrea's tensions with the boudas, and Kate and Curran navigating their new mated life in the Keep. There are several things left for later, most of the interpersonal entanglements and relationships will clearly continue. Kate is still the narrator, and she's changed a lot in ways that make her narrative voice feel a bit different from the start of the series, but the changes have been gradual enough that it's a gentle progression and she still sounds like herself overall.

The first four books introduced at least one major magical faction per book, and in this one they're all needed for one big thing towards the end. While the main storyline is explained well enough that it could probably make sense on its own, the finale's "and now we call in the whole team" vibe means that if you don't know what happened in the other books it could feel like a deus ex machina with all these heavy hitters and it might not be satisfying. For anyone who did read the other books, it's more of a culmination of a lot of blood, sweat, and more blood that Kate has poured into her work thus far, with excellent payoff for the extended setup.

While MAGIC BLEEDS has a slightly flashier conflict, MAGIC SLAYS is more impactful because of the new understanding it establishes between the characters in and around the race to stop the city from being massacred. The stakes are higher and the emotional intensity demanded by those stakes feels appropriate. The earlier books tended to have an implicit threat to the rest of the city if they failed completely, but this time there's a different quality to the threat because it involves a device which is (once it warms up) capable of an insta-kill where the radius for the area of effect is measured in miles. 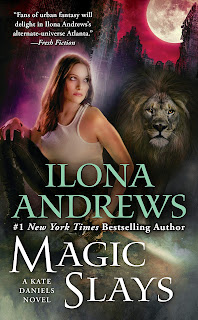